Aside from the interesting street-style images that come out of the annual Pitti Uomo trade show, the event doesn't seem that different from the shows that I've visited here in NYC hosted by MRket at the Javits Center. Both events feature row upon row of booths featuring some wonderful men's clothing but at the end of the day, these are essentially events for buyers and sellers to connect. So I was intrigued by Simon Crompton's recent post at Permanent Style regarding beShoes, a symposium and cocktail evening celebrating the best of the world's shoemakers.

Unfortunately, I won't be anywhere near Florence in early to mid January so I'll miss the symposium. But it does sound like something that I would like to attend. Kudos to Mr. Crompton and the folks at Stefano Bemer and Bespoke Magazine for putting together what sounds like an enjoyable evening. 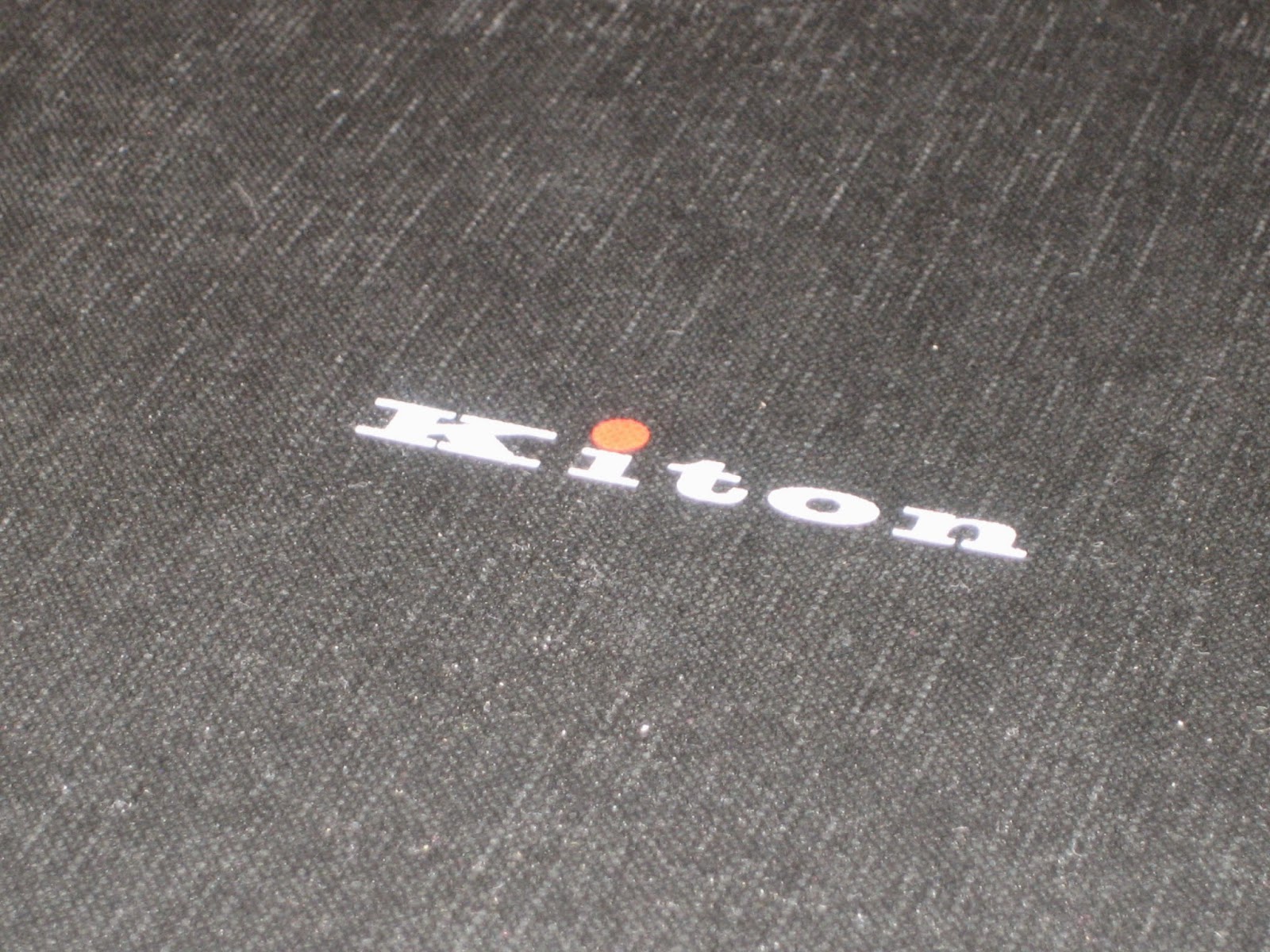 As the story goes, Carl Perkins was on stage one night when a scuffle broke out near the stage. In the middle of the ruckus, Perkins heard someone yell out, "Uh-uh, don't you step on my suedes!" When he looked down at the fellow, Perkins saw that the guy had on a pair of blue suede shoes. The line stuck with him, and in 1955 he wrote the song "Blue Suede Shoes." A rock and roll standard, it was eventually recorded by everyone from Elvis Presley and Buddy Holly to Bill Haley and Jerry Lee Lewis. 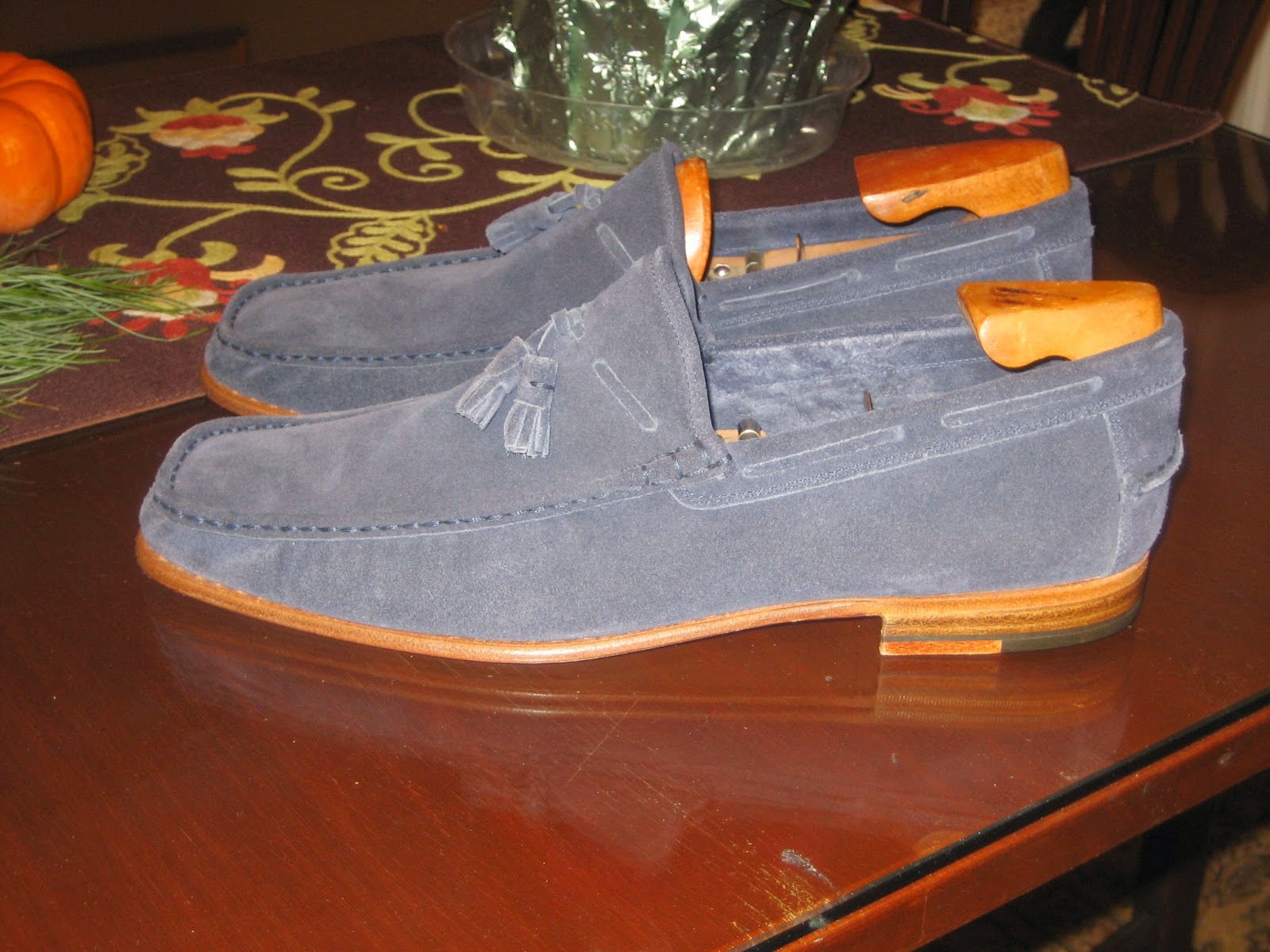 Menswear isn't terribly different than the rest of the world, which is to say that the more things change, the more things stay the same. If blue suede shoes were all the rage in 1955, it looks like they're still going strong. Of course, the pair on display at Graceland are captoe brogues, but when I happened to come across a pair of tasseled loafers at the Kiton sale, I was intrigued. I've been looking for a new pair of casual loafers for a while now, but nothing had really jumped out at me. In this case, I thought the blue suede would be a nice change of pace and could work well with khakis or denim. 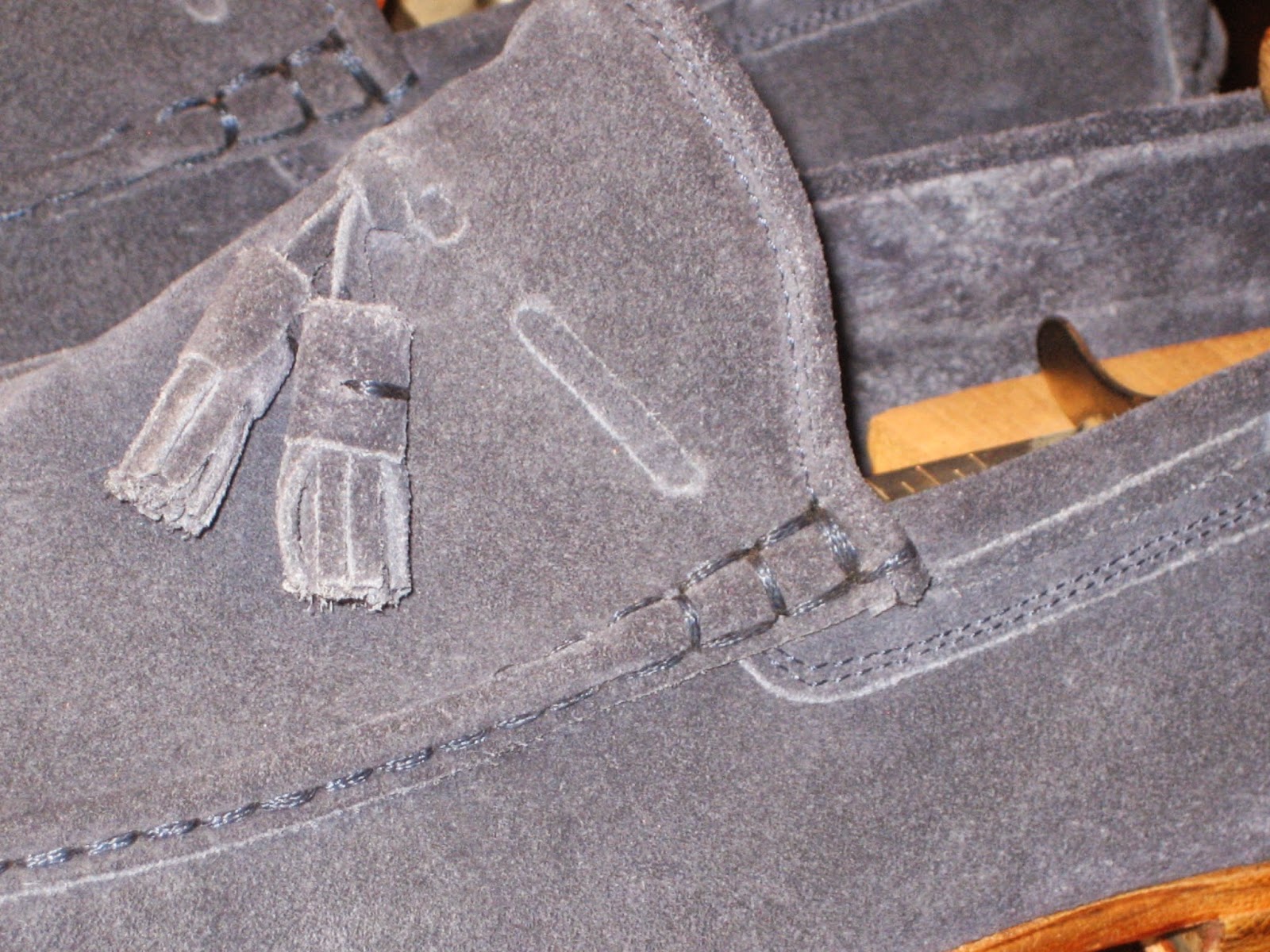 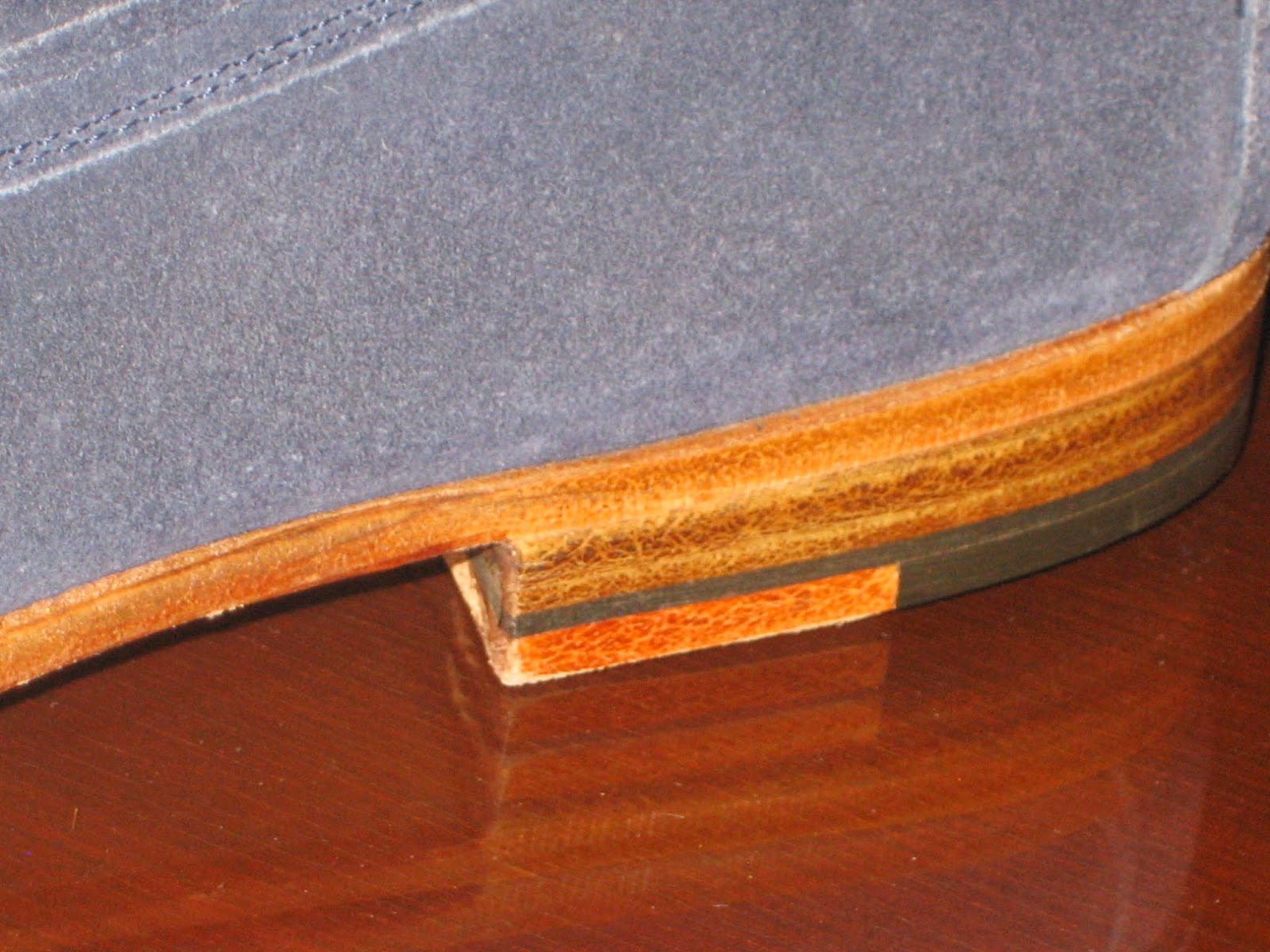 The shoes have some nice details - the leather uppers are unlined, and I really like the contrast between the navy suede and the natural sole edge. Kiton shoes are well made, but probably a bit beyond my comfort level at the suggested retail price. This unlined blue suede loafer would normally fall into that category for me, but at 85% off the retail price, I thought it was worth a shot. Upon initial wearings (in the house), I've found the shoes to be incredibly comfortable, and the EU 9 fits like a glove. 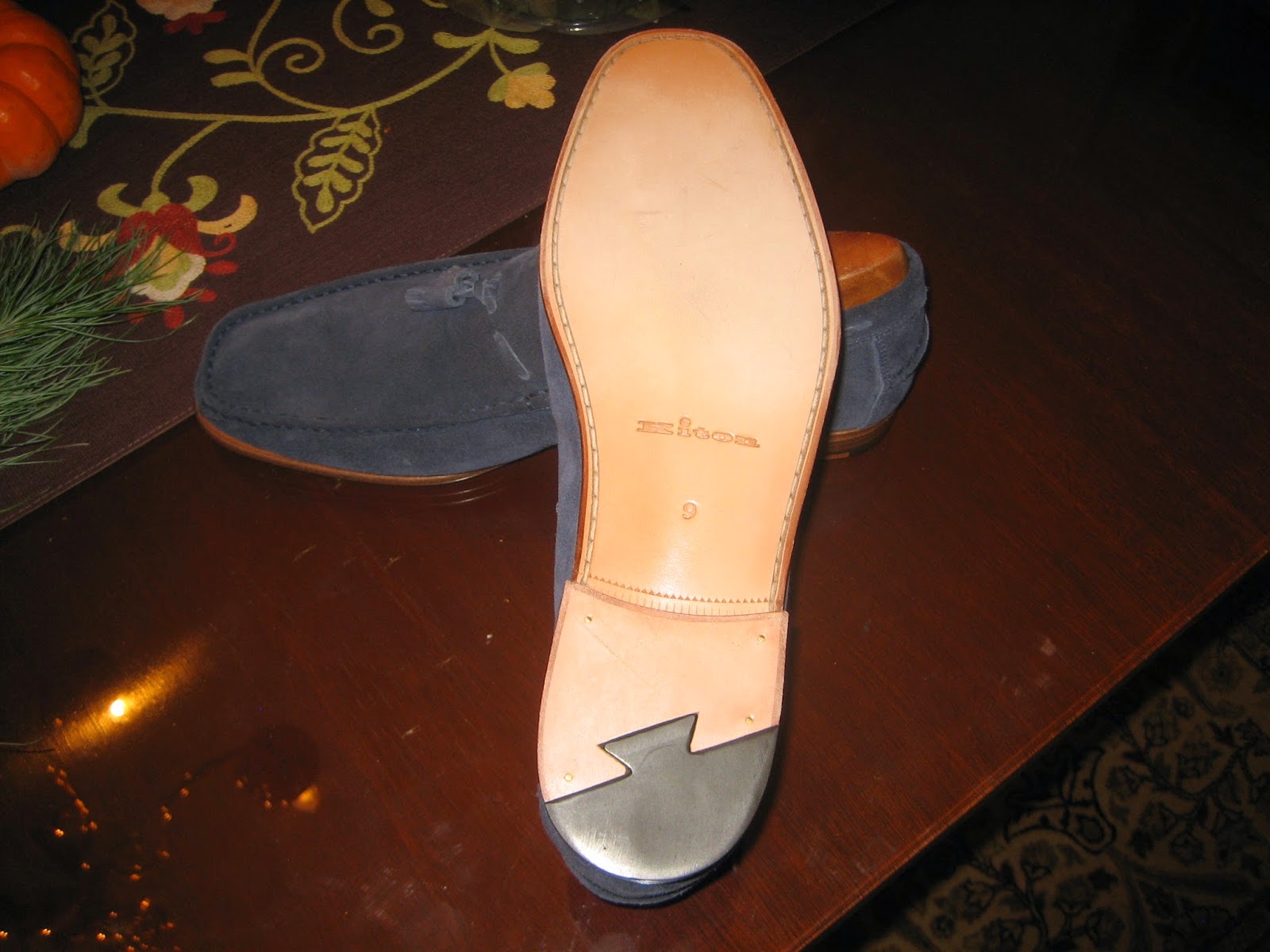 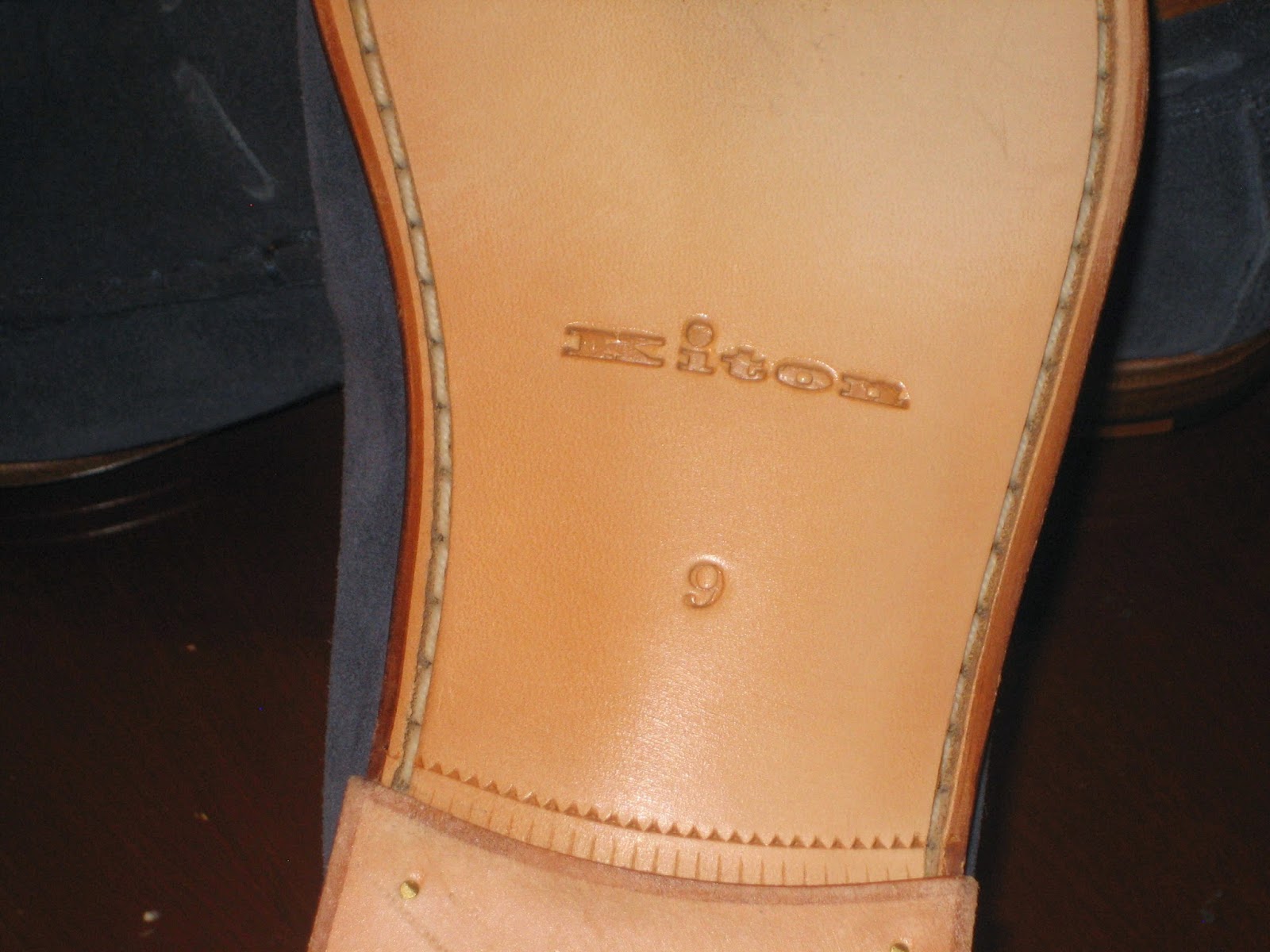 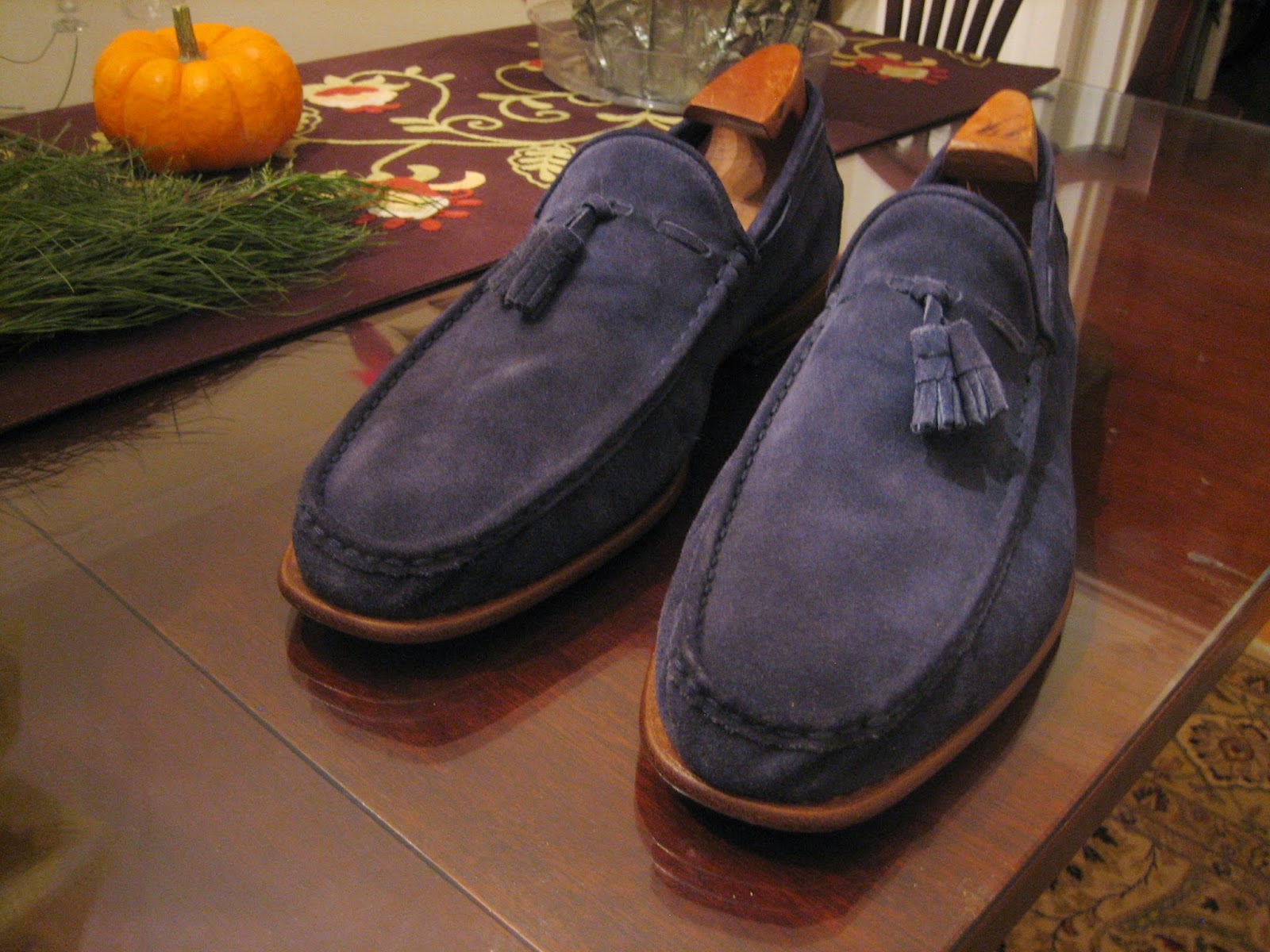 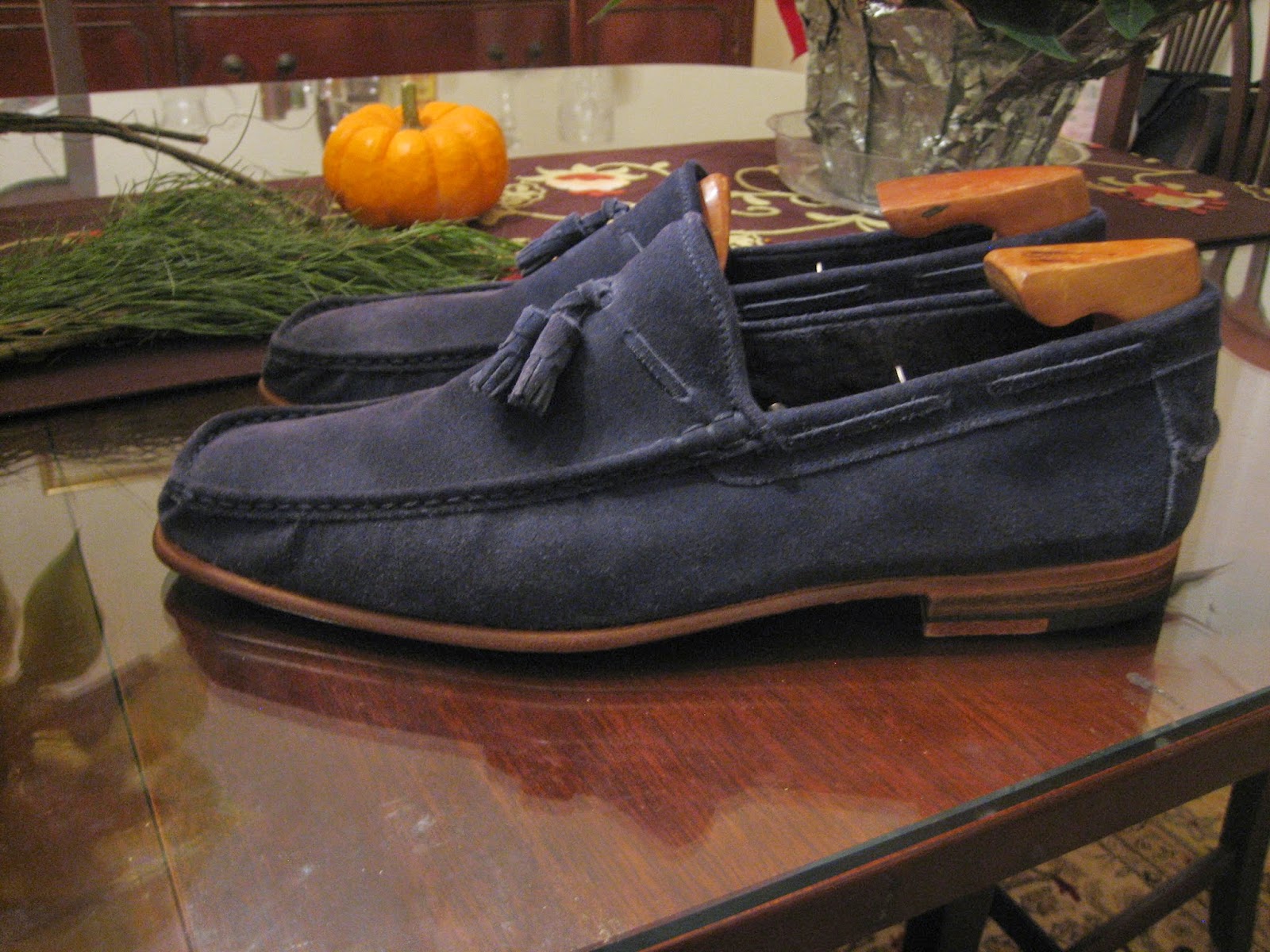 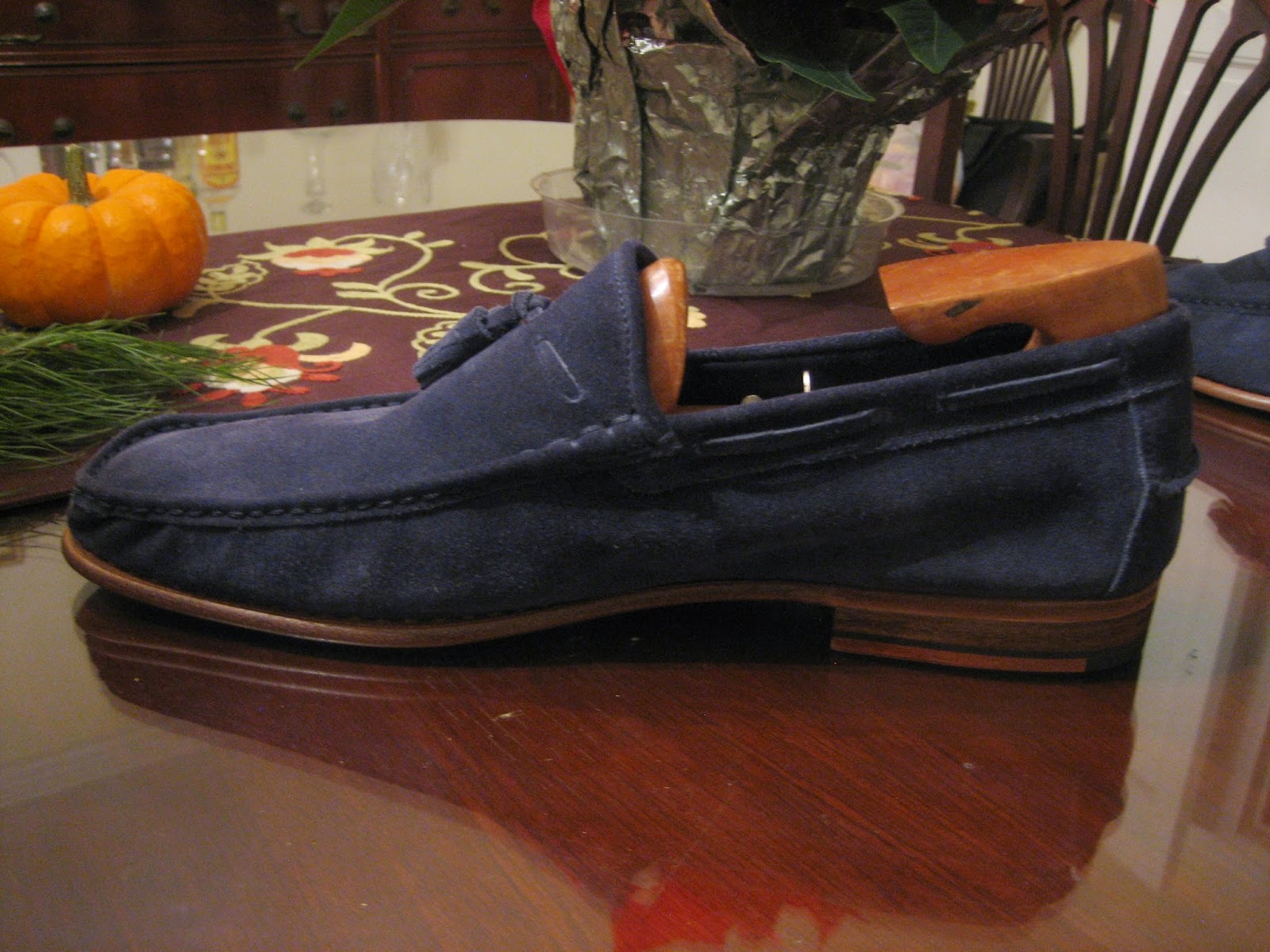 I'm looking forward to joining the legions of Americans, both past and present, who have boldly pronounced at one time or another, "Don't scuff the suedes." 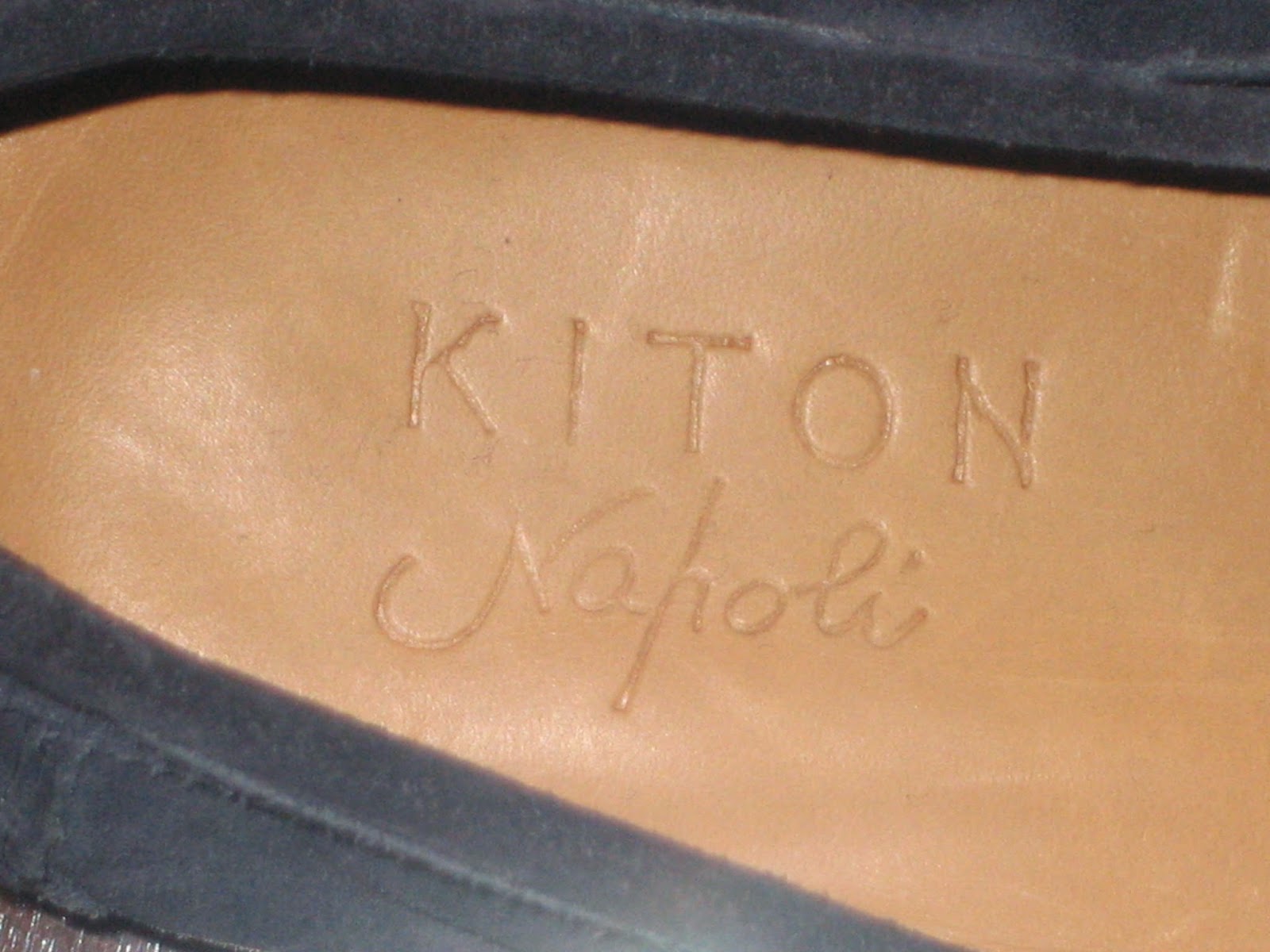 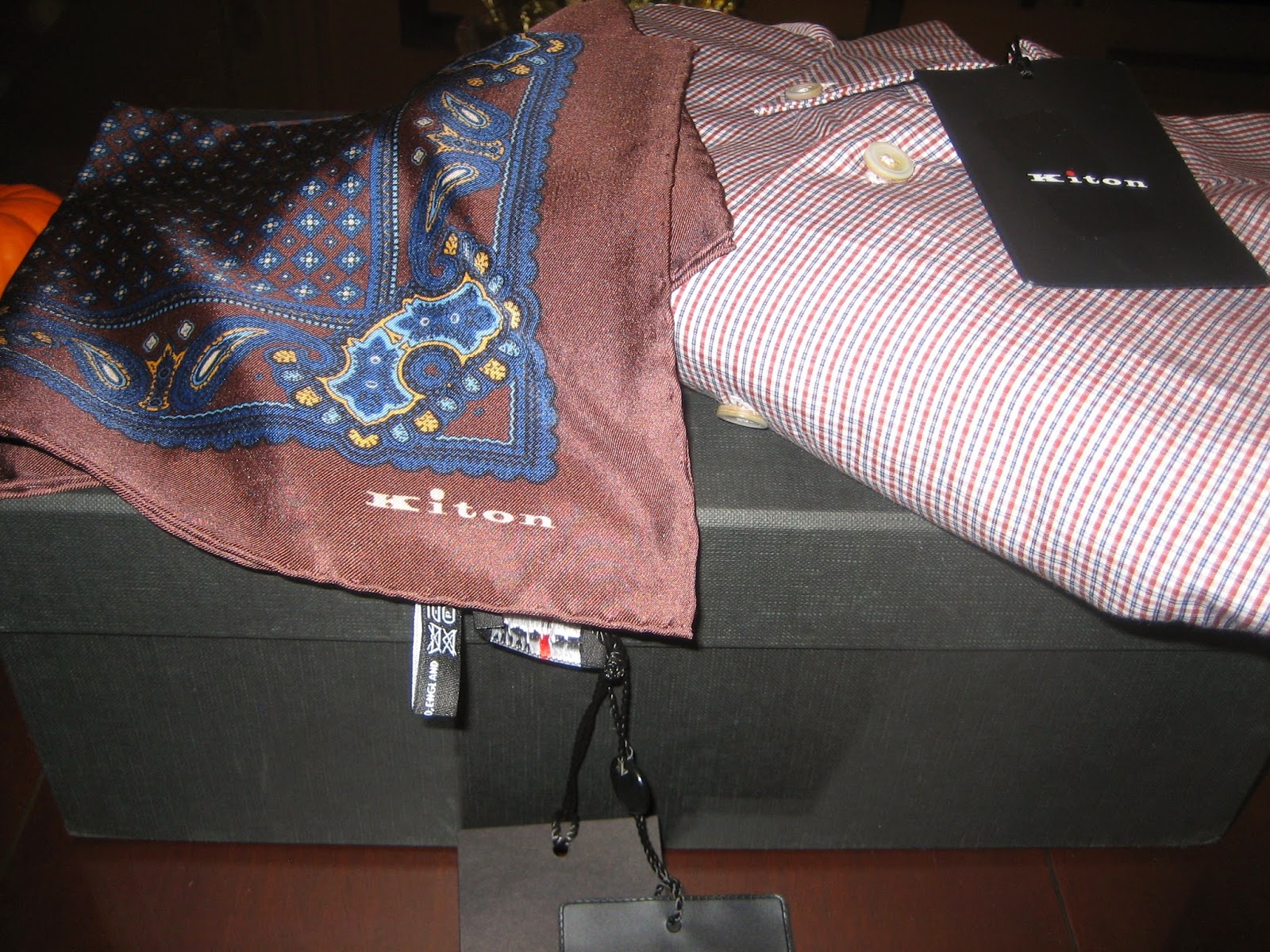 In recent years, Soiffer Haskin has added a veritable cornucopia of high-end luxury purveyors of men's clothing to their sale line-up. Where once you could expect an annual bonanza of deals from companies like Paul Stuart and Asprey, recent seasons have included such iconic brands as Ralph Lauren and Brioni. This past week, Kiton took the stage with items discounted as high as 90% off the (admittedly high) retail prices.

I wasn't looking for anything in particular, but I happened to be near the Soiffer Haskin site - well, technically I'm in the area every day as the location is right across the street from Penn Station - so I dropped in. I've been looking to add a pocket square in brown and a few casual button-down collar shirts, and I was in luck. The selection was thoroughly picked over by the last day, but prices had also been reduced to 80% off men's accessories and men's dress shirts (I also picked up a pair of blue suede casual loafers that I'll have more on in a subsequent post). So there were some deals to be had if you could find something to your liking. 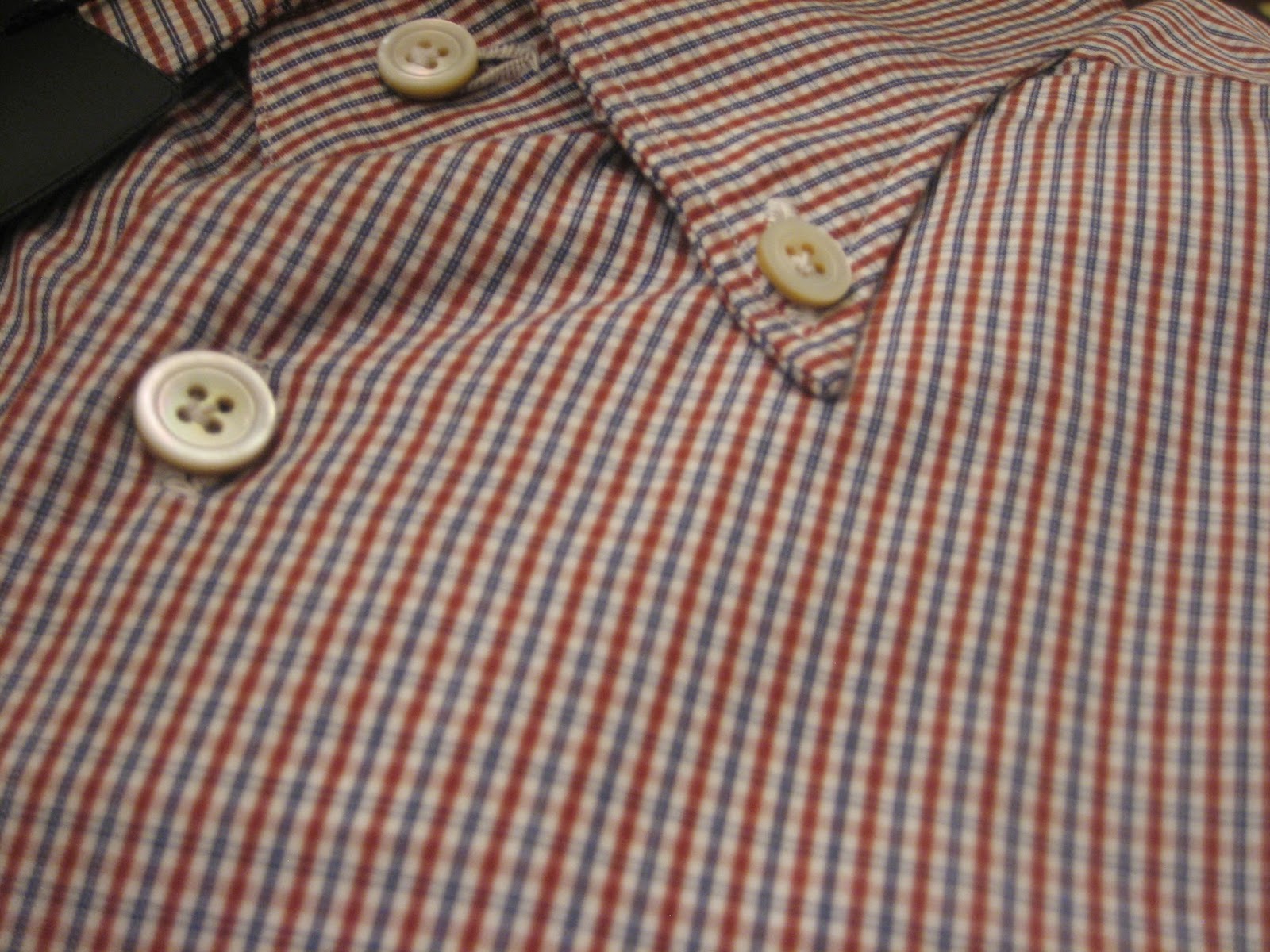 The shirt is a nice navy and red checked pattern that caught my eye as I sifted through the shirt rack. The quality is what you'd expect from Kiton - MOP buttons with a teak hue, and lots of handwork. I could be mistaken, but the edges of the shirt appear to be hand-sewn and hand-rolled like the edges of a pocket-square, 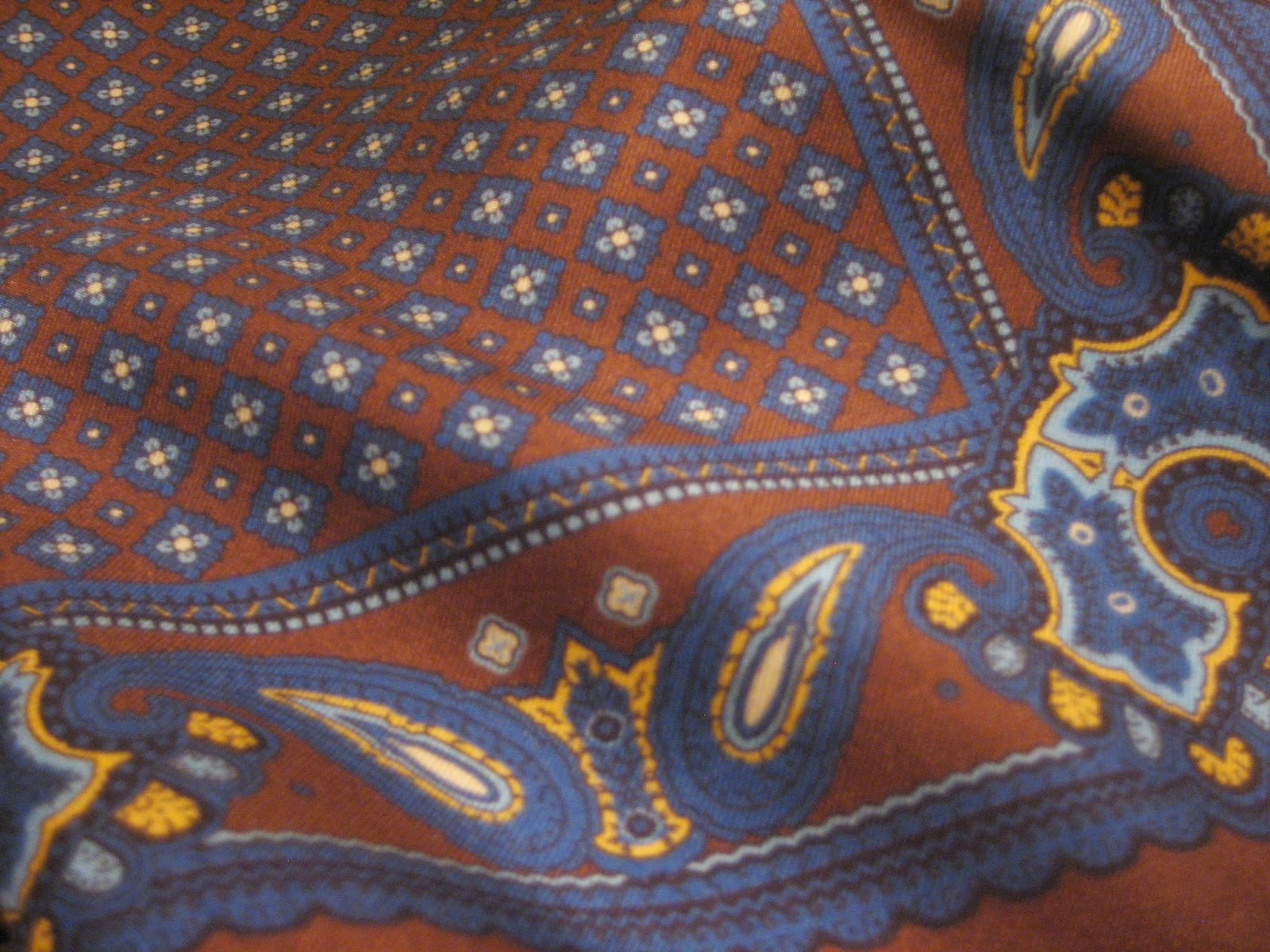 The pocket-square that I found is also quite nice. As I mentioned, I was looking for something in a brown-based pattern, and this fit the bill perfectly. The blue paisley and center pattern reminded me of something that Drake's might produce. Interestingly, the Kiton square was actually made in England - printed in Macclesfield, to be precise - and there is something distinctly British about the design, to my eye.

All in all, I'm glad that I stopped in and I'm very pleased with these additions!
Posted by Dan F. at 8:54 PM No comments:

Rollin' with the Long-Hair Felt: The Vintage Borsalino Fedora 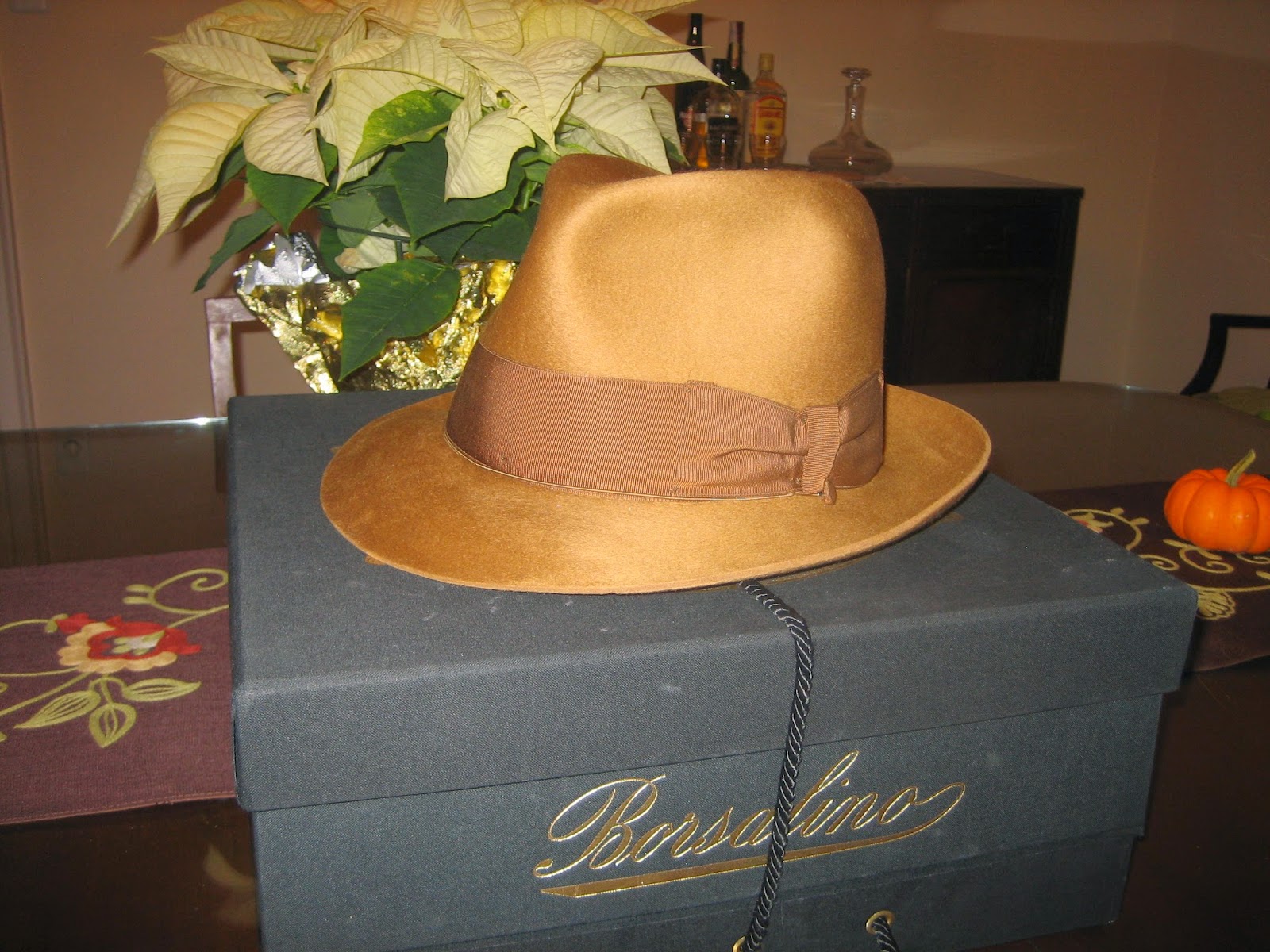 I've put together a decent collection of panama hats, straw boaters, and linen caps over time. Surprisingly, though, I hadn't picked up any felt or fur fedoras for the cooler weather. Perhaps because my father always had on a newsboy or eight-piece pie cap, I tend to wear a variety of cashmere and woolen caps to work and on the weekends. And while I generally enjoy perusing the variety of offerings on display at a place like J&J Hatters in New York City, more recently I've found myself looking into vintage fedoras. 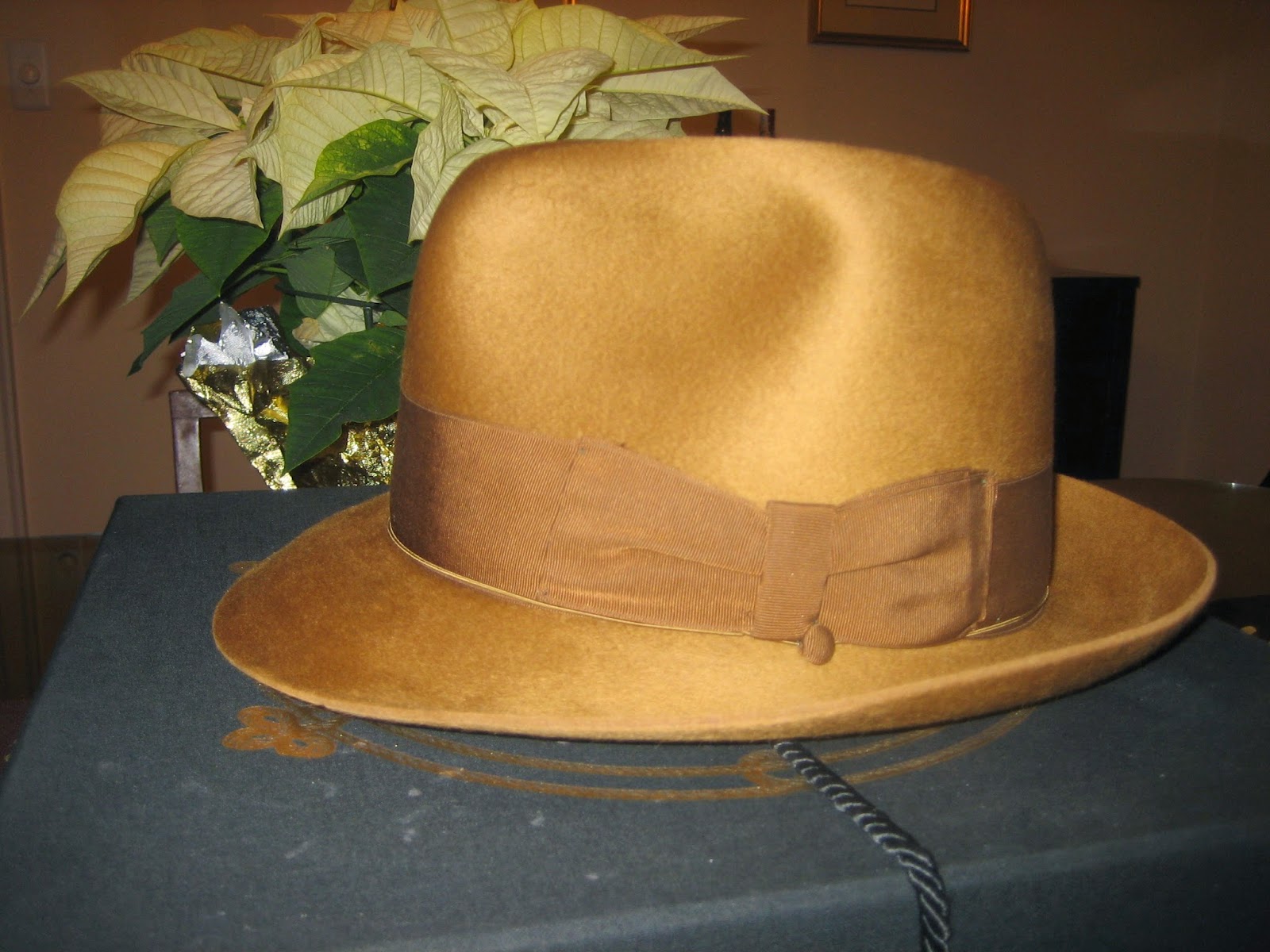 Headwear seems to be one of the few categories of menswear where most people seem to acknowledge the superior quality of vintage items. Also, when looking at modern stock, I tended to find the crowns were less pronounced than I think I would prefer (I'm sure this is something that wouldn't be a problem if I went with a custom order). At the same time, the felt on "ready-to-wear"fedoras does not seem to be very substantive (again, this is probably something that could be addressed with a custom order). 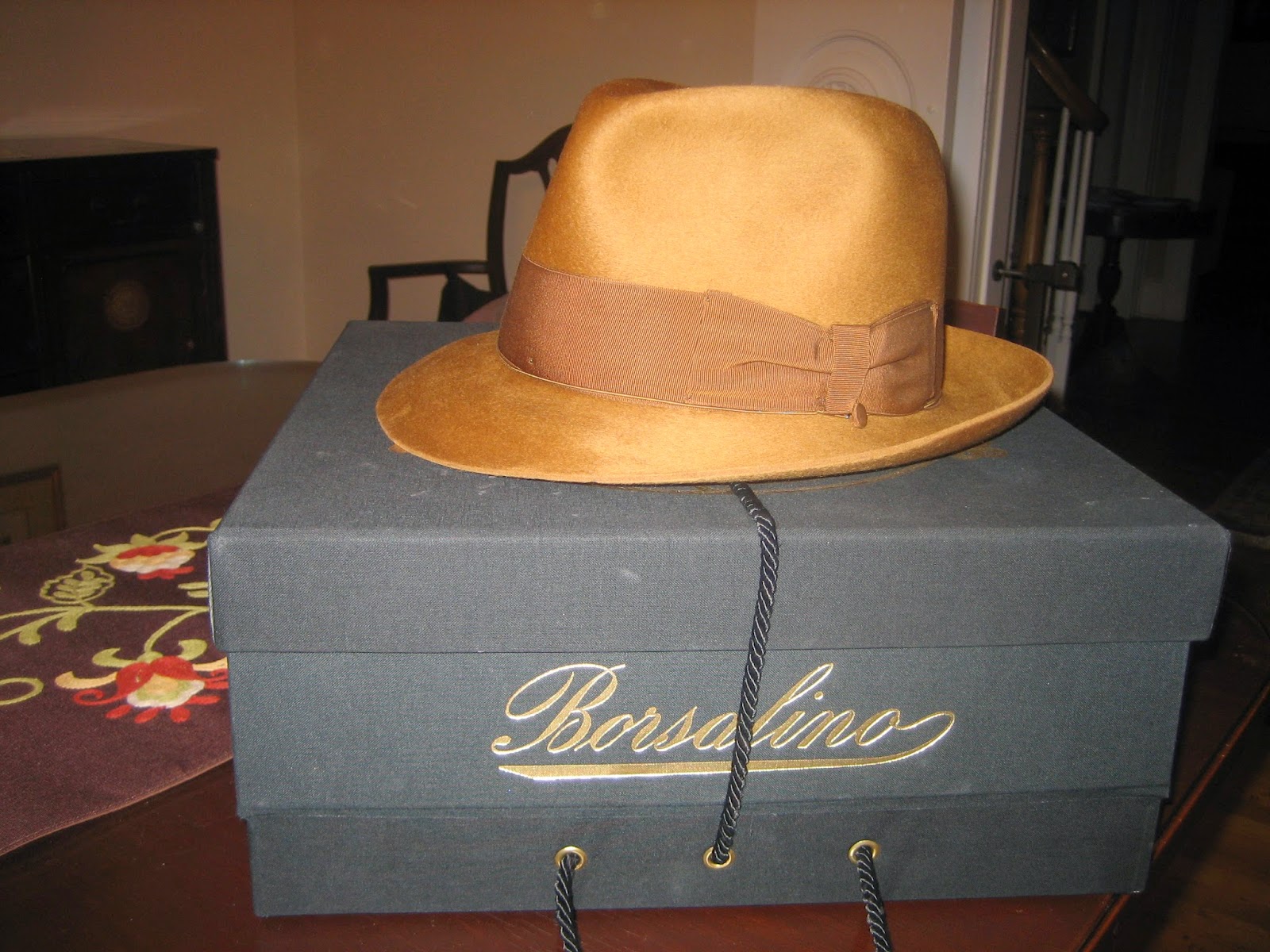 So, when I came across what appeared to be deadstock vintage Borsalino fedoras in what appeared to be a lusciously thick, long-hair felt in a beautiful whiskey or camel color, I took the plunge. I'm by no means a fedora expert by any stretch of the imagination. but I was pleased with my acquisition. The felt is really exquisite, and the crown is quite high (about 4.5 inches) and pinched in a way that reminds me of something George Raft would have worn in The Glass Key. 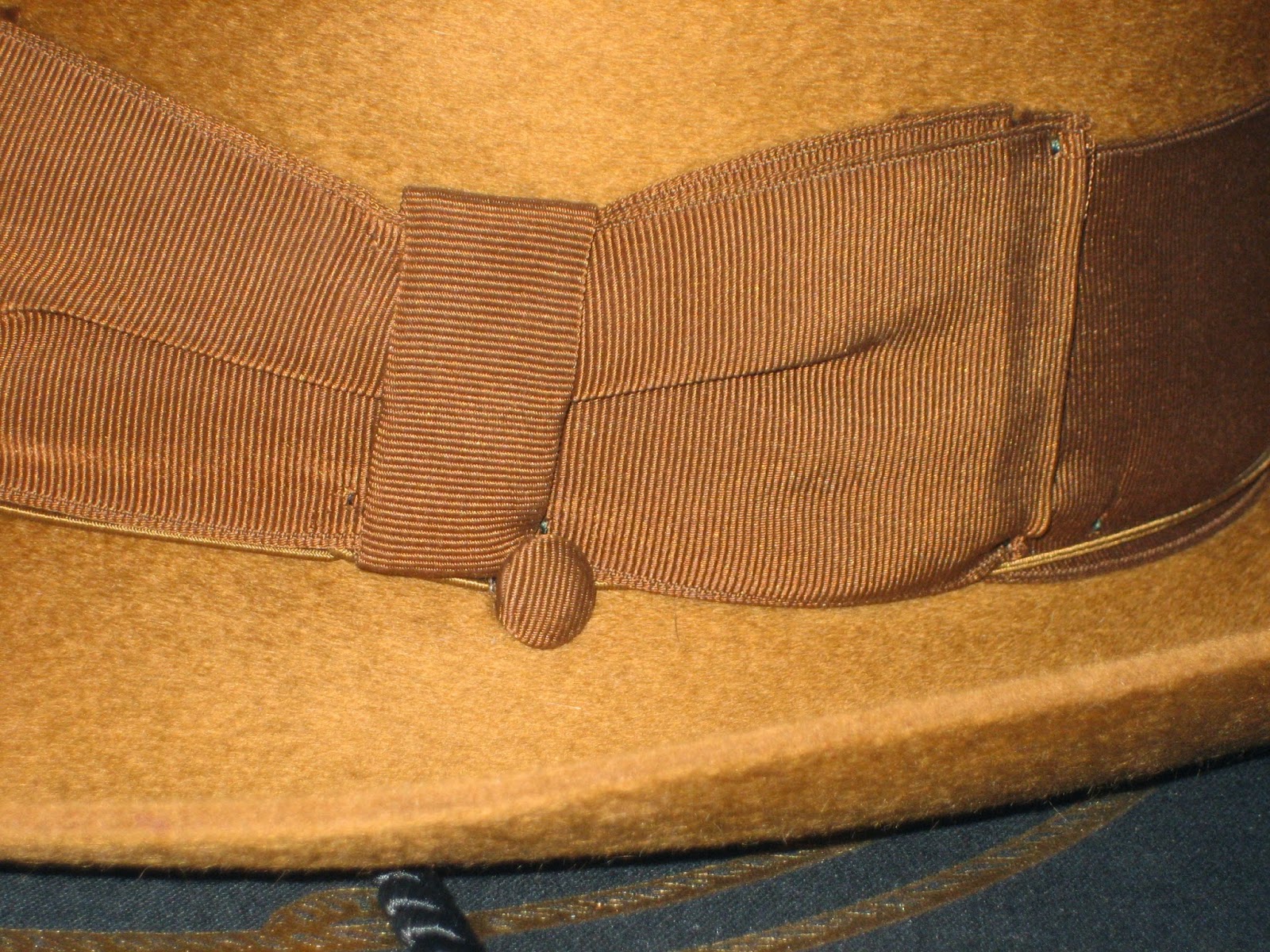 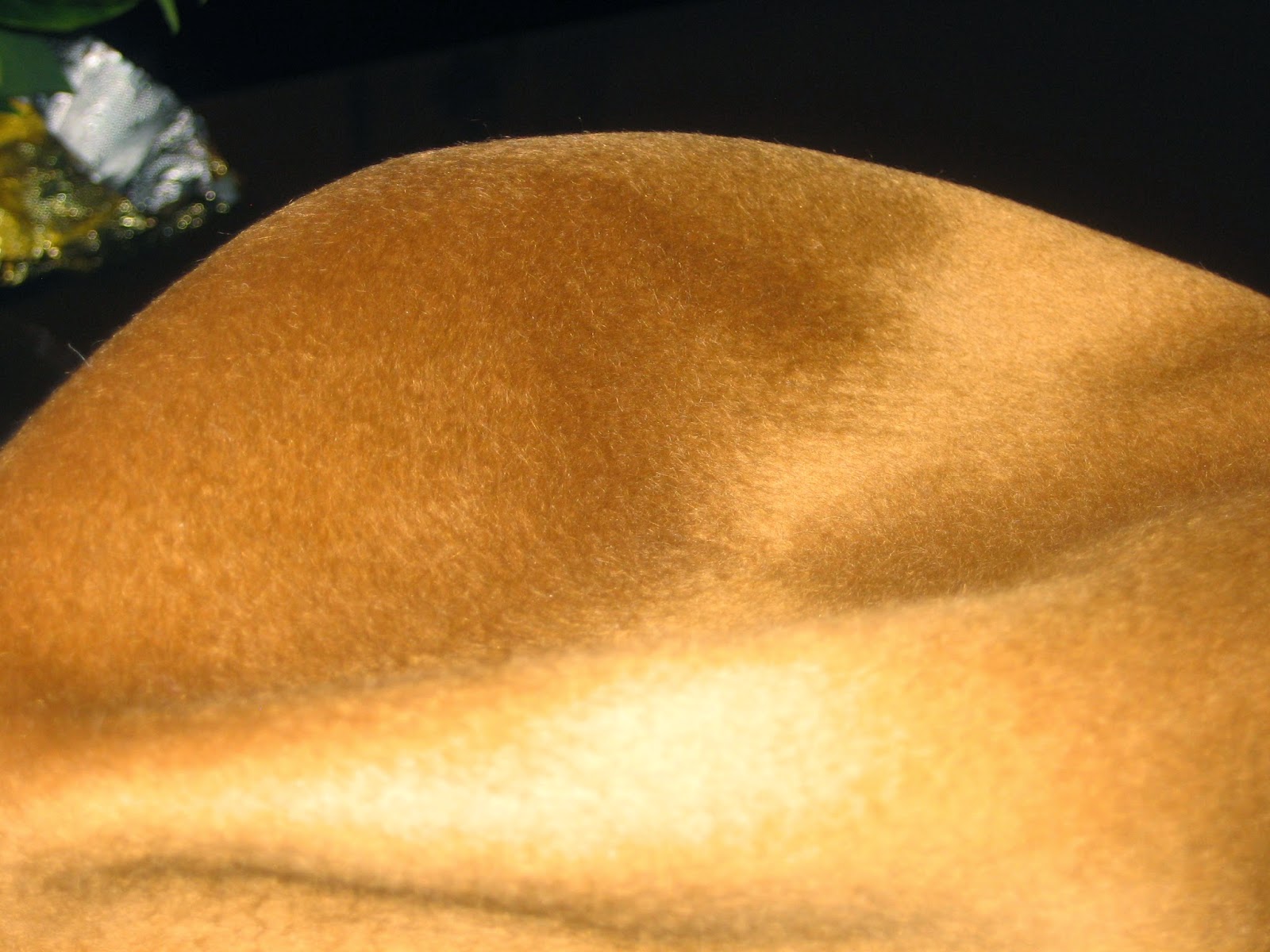 I'm not sure that I'll ever use the wind trolley, but its a wonderful little detail which I believe Borsalino included with models intended for the US market, This particular model was made by Borsalino for a Chicago haberdasher named Thomas & Moore which I believe is no longer in existence. Someone with more expertise than I could probably date the fedora based on the model information inside the sweatband (it appears to be a late '60s/early '70s model), but I would love to hear from anyone who knows more about the store. 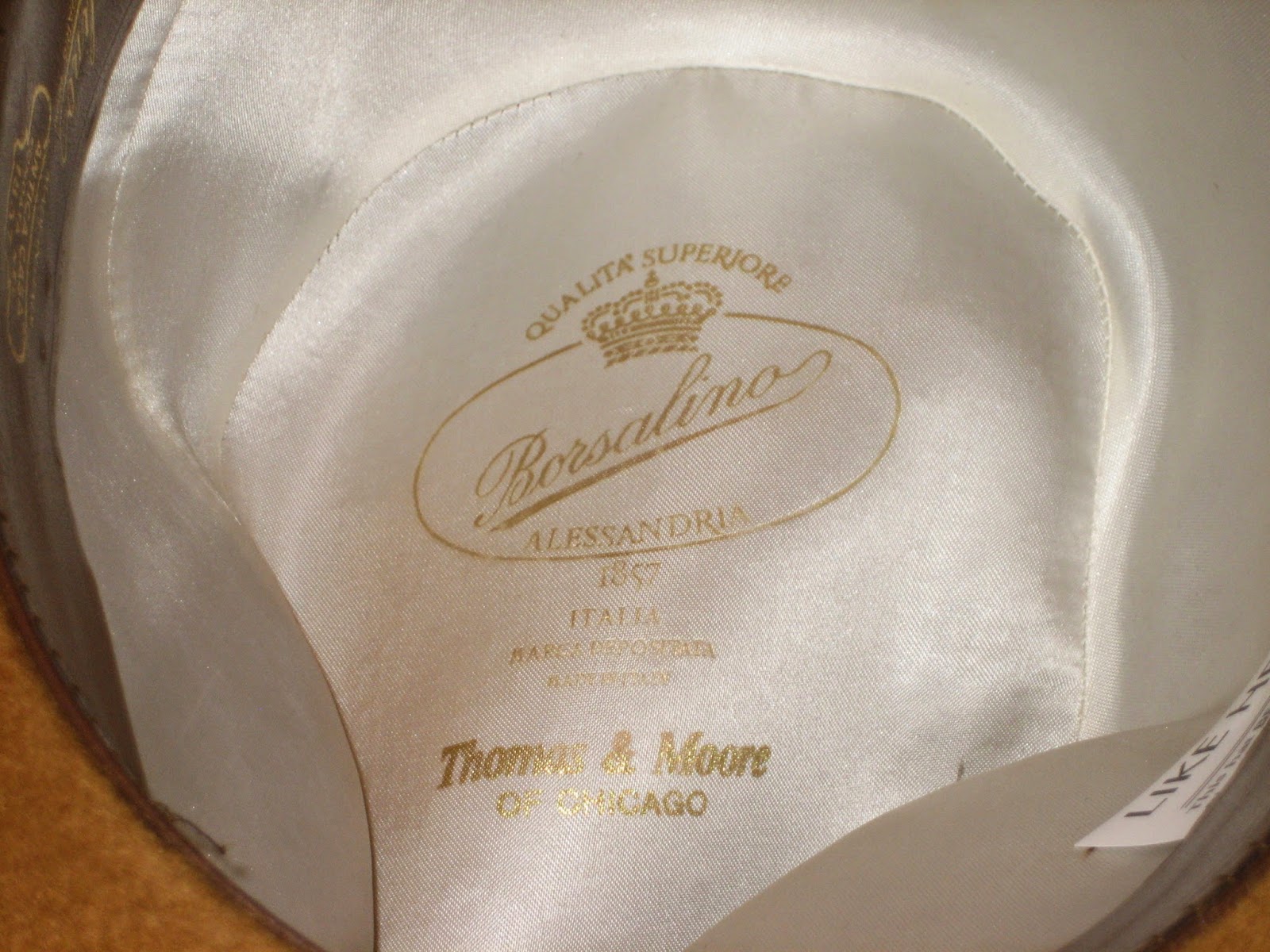 With temperatures pushing into the 30s and 40s (degrees fahrenheit) here on the East Coast, I'm looking forward to putting this long-haired felt fedora to good use in the weeks ahead! 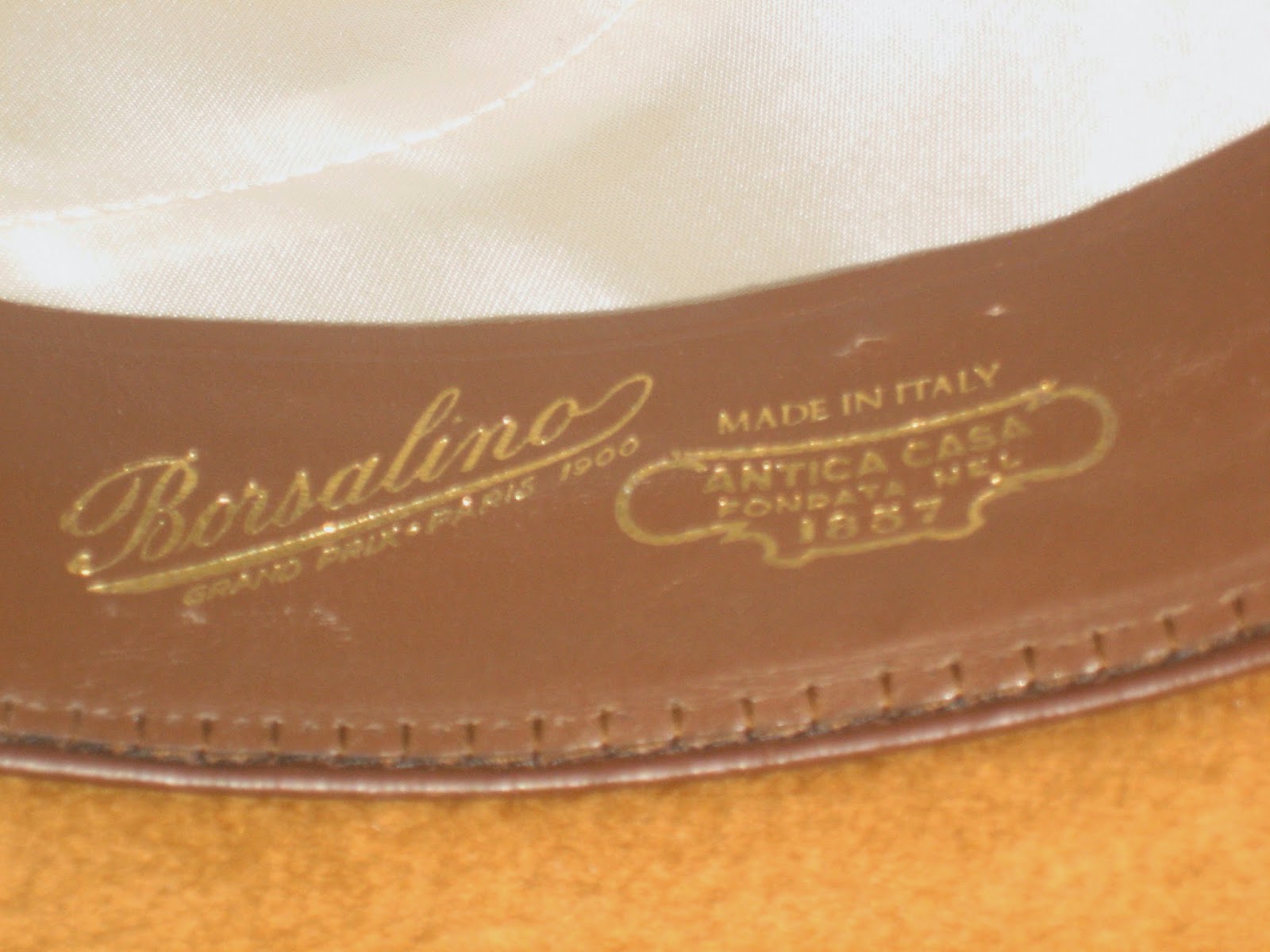 The Thomas Brogue from Foster & Son 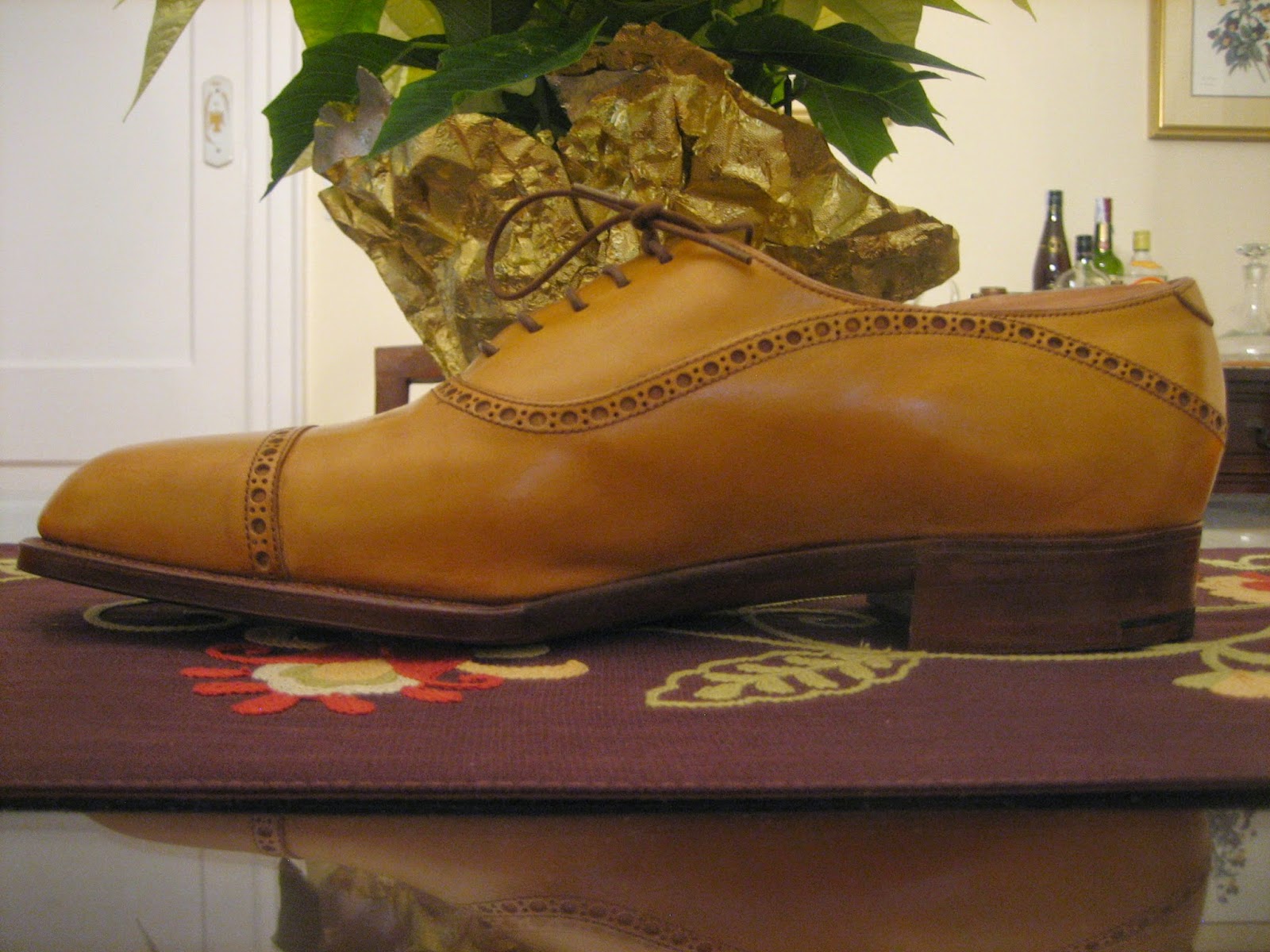 Every now and then, a fine pair of shoes will practically fall into your lap and and you can think is, "Somebody up there likes me." In this case, the shoes in question are a pair of Thomas brogues made in 1996 in the rare "classic polo tan" calfskin leather (you can see the Thomas brogue at the Foster & Son site here). 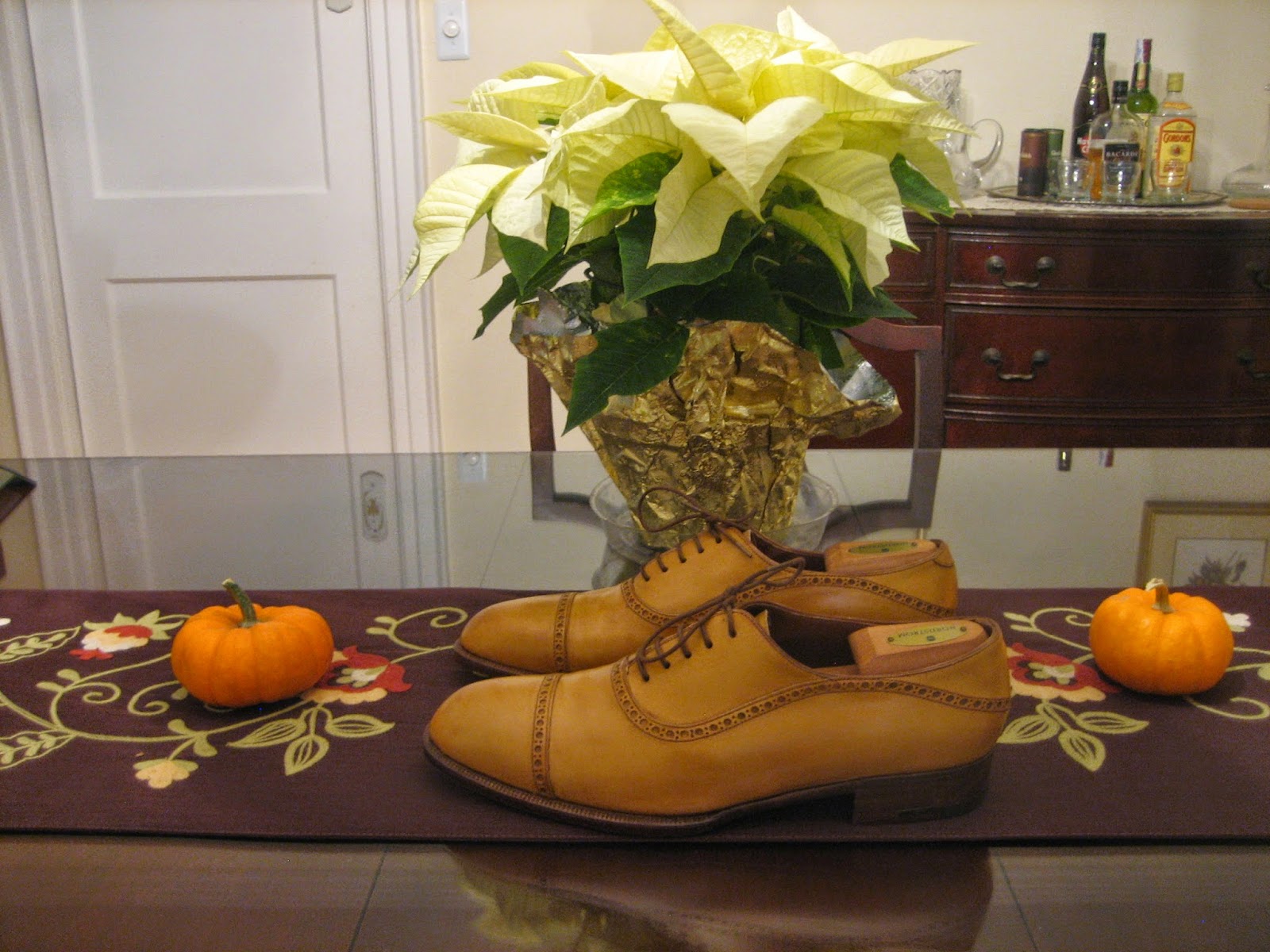 The seller identified these shoes as having a wide width, which is inaccurate. In hindsight, the sole edge is a bit pronounced - so when you measure the sole, you get a wider than normal measurement. But I don't believe the actual inner width of the shoe is that wide - it's seems fairly standard. Unfortunately, this seller had two additional pairs for sale that were identified as narrow widths - which, in hindsight, were probably just shoes with normal or standard sole edges, and which probably appeared to be narrower compared to the Thomas brogues. I didn't take a chance on those other pairs because of that width description, but more than likely those shoes were ordered by the same customer, and probably fit the same. In any event, I'll just have to be happy with the pair that I did snap up. 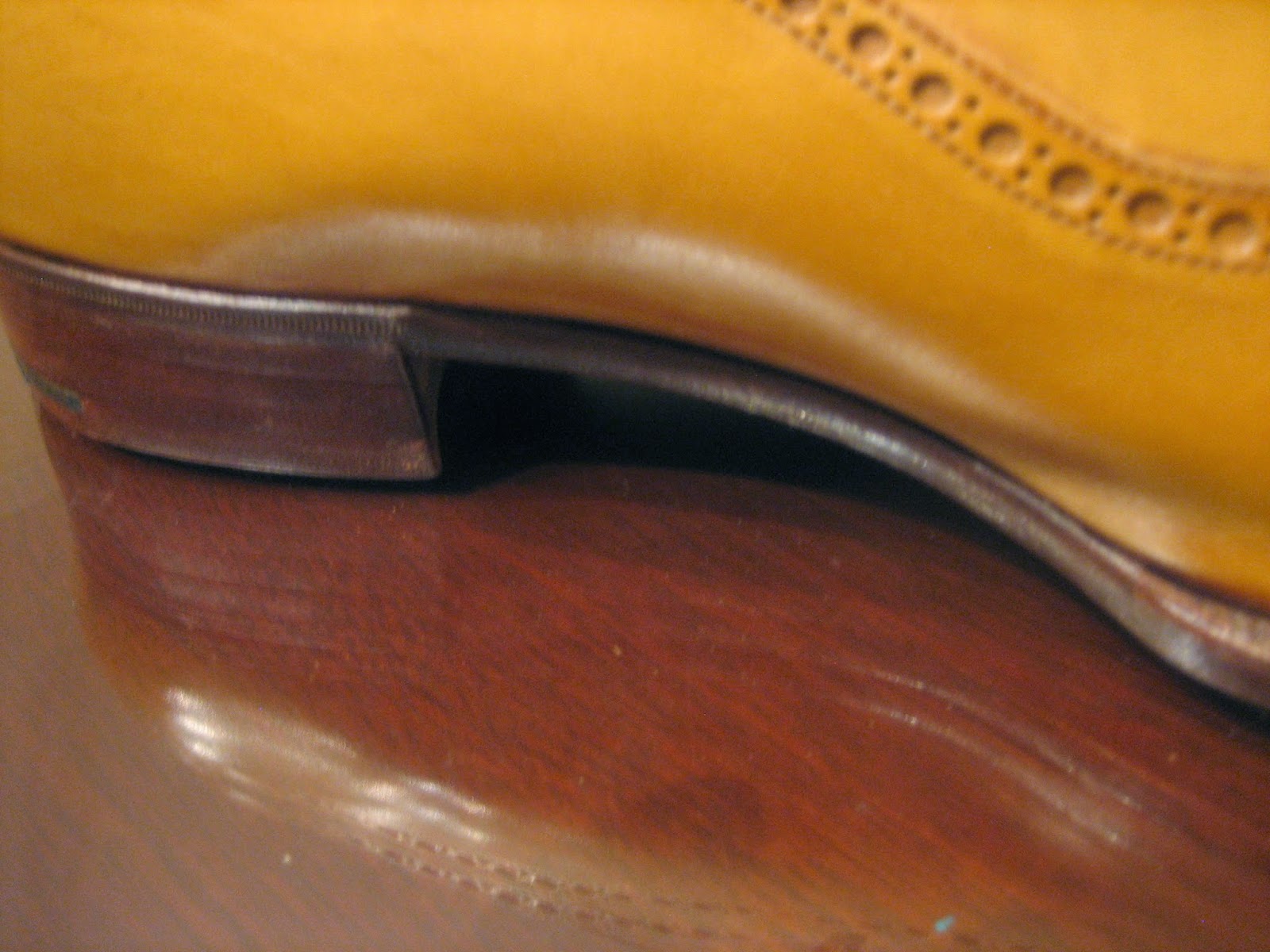 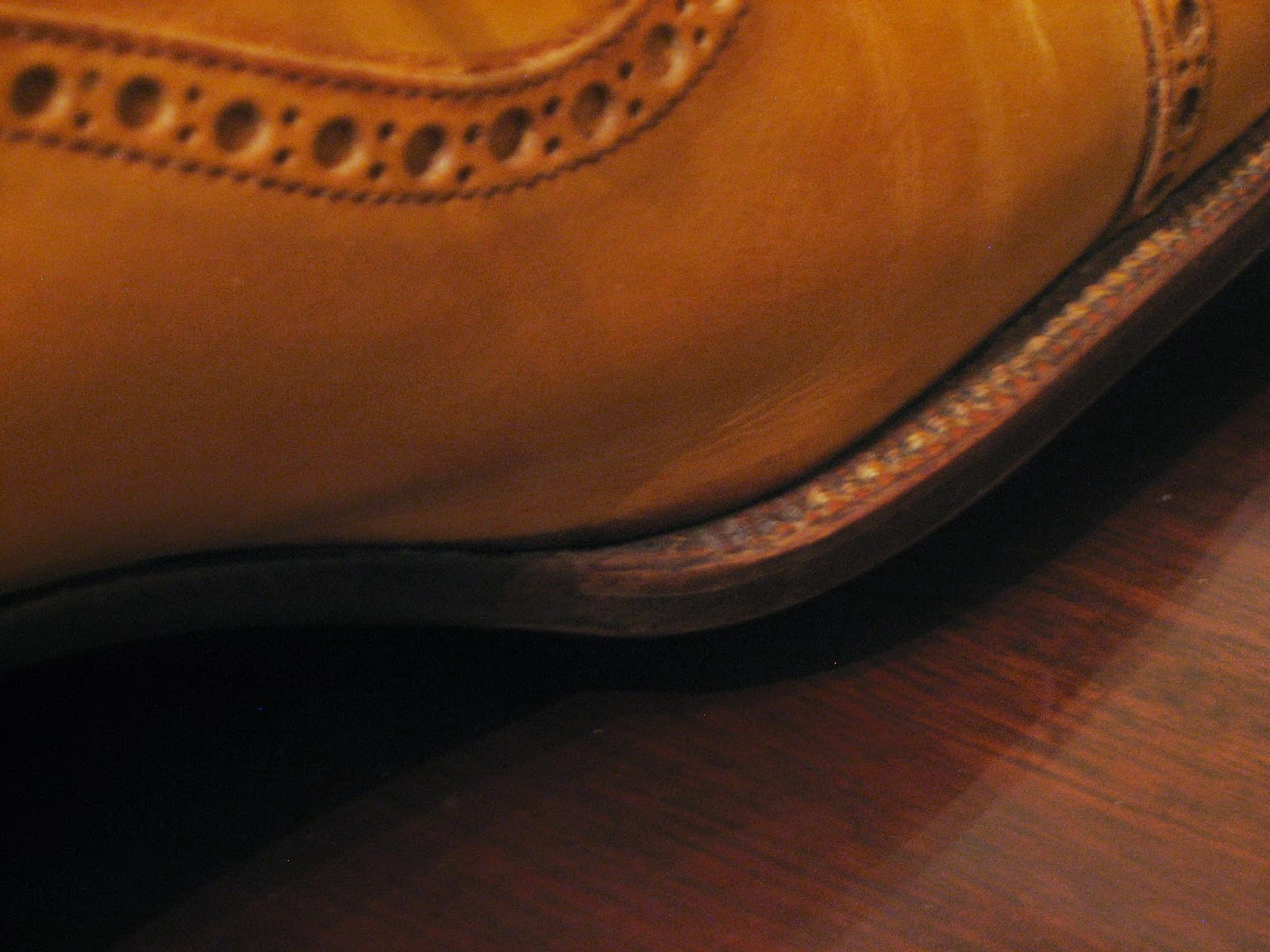 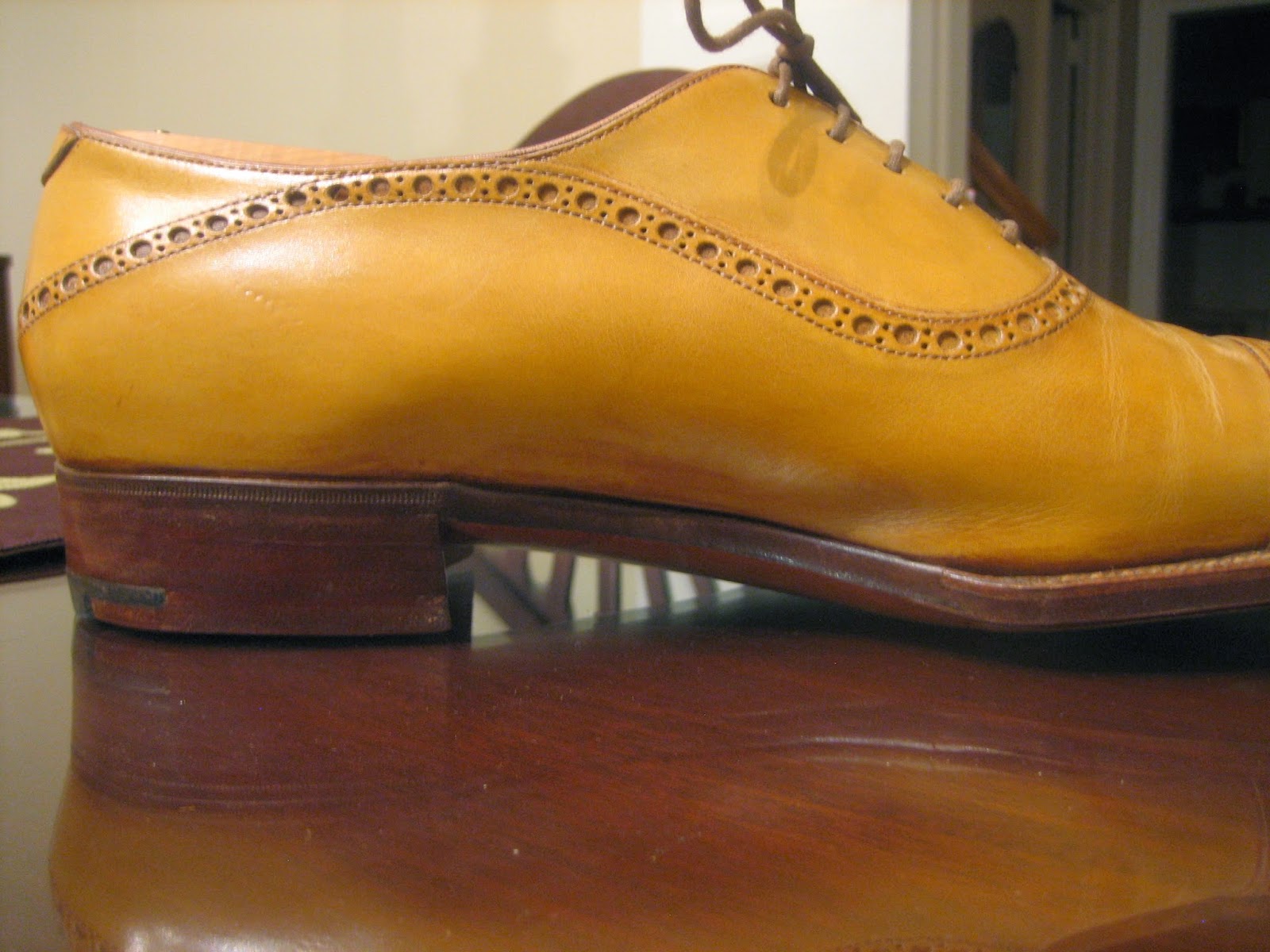 Surprisingly, the shoes were never worn by the gentleman who placed the original order. Even more shockingly, these shoes fit my feet very well :-) 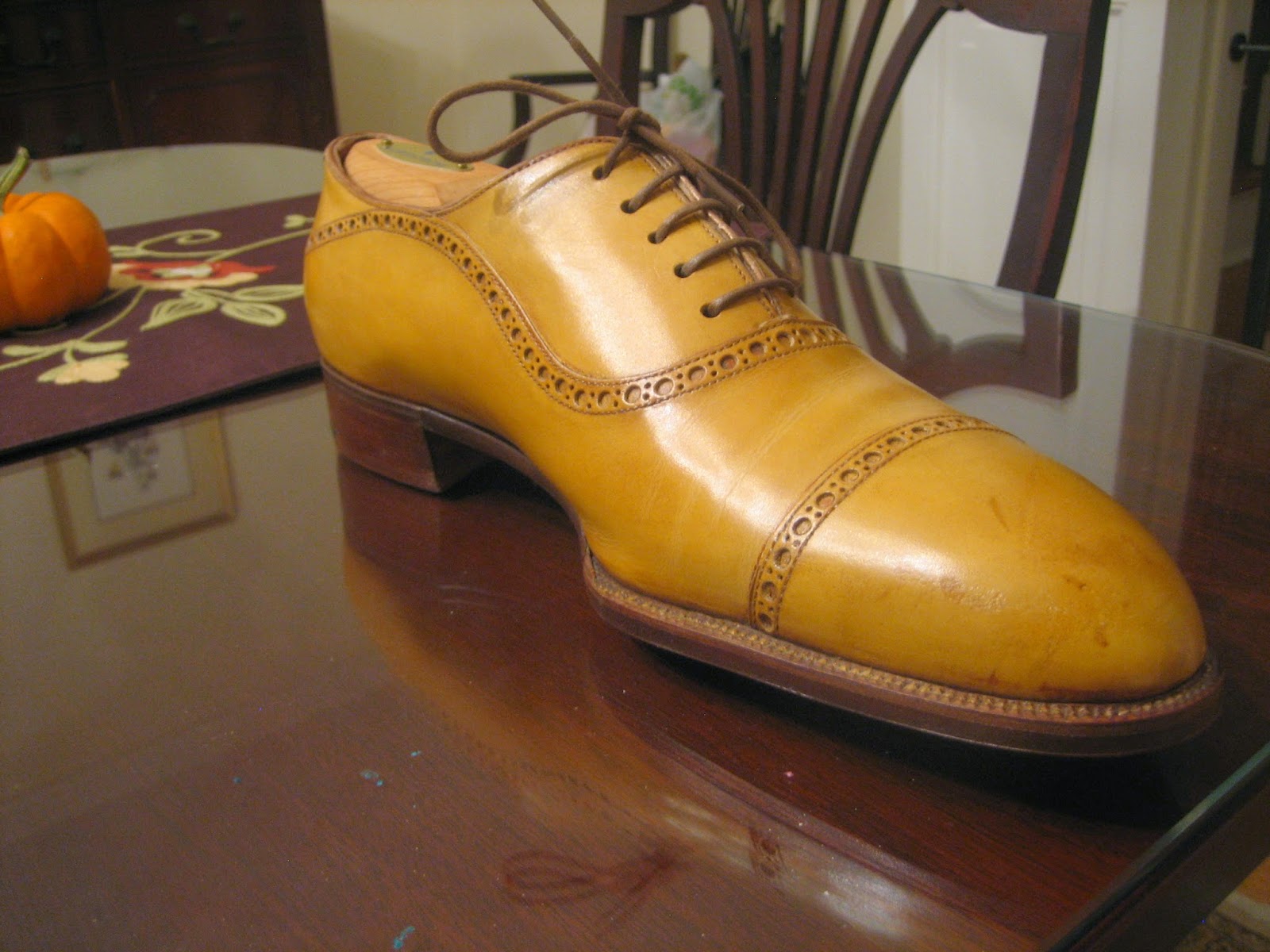 I'm looking forward to wearing these shoes in the spring and summer. I've been applying a healthy dose of Saphyr's Renovateur - the leather doesn't look dry, but it is almost twenty years old, so it certainly can't hurt. In the meantime, I've just been enjoying some of the details - the bevelled waist and suppression create an elegant silhouette that I've tried to capture in the images. The heel has angle to it that is reminiscent of a cuban heel, and creates an interesting angle effect where the heel meets the sole. Finally, I've never seen a shoe with such a striking brogue pattern - there is something elegantly whimsical about the design. 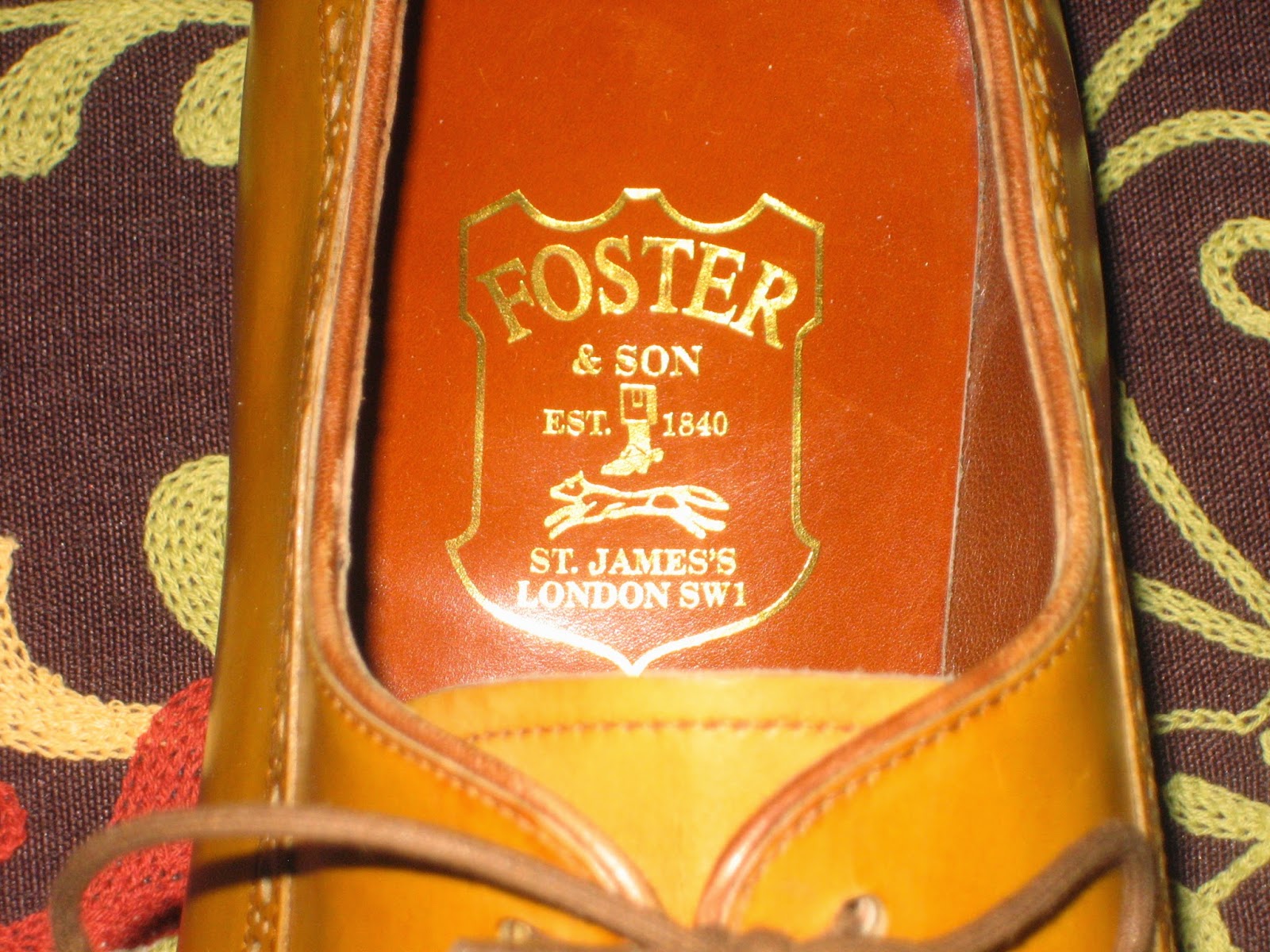 All in all, an exquisite example of English bespoke shoe-making at its finest.


Sample sale season seems to be kicking into high gear for luxury men's lines. Fresh on the heels of the Kiton sale (more on that later) at Soiffer Haskin, Brunello Cucinelli is having their bi-annual sale at their showrooms in Manhattan. I've been to this sale before - discounts usually start at 60 to 65% off during the beginning of the week before bumping up to 75-80% off during the final two days. I've written about the sale before, and have come away with a few choice items in the past, ranging from a canvas/leather overnight bag (you can see images here) to cashmere mock zip-ups, polo shirts, and button-down shirts. Even with the discount, the prices are still a bit steep but in some cases, definitely worth the investment. 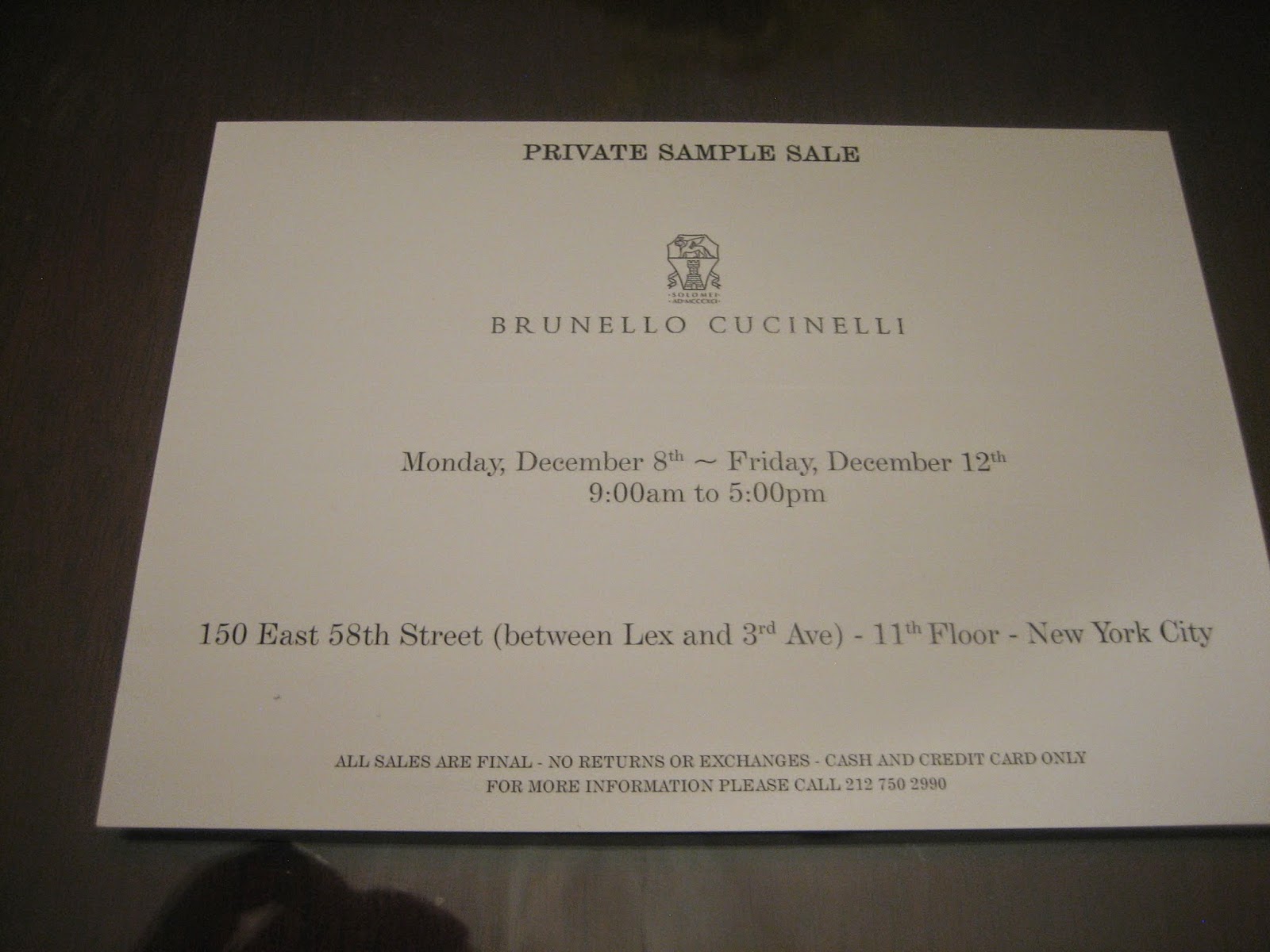