William Goadby Loew, possibly the best-dressed working stiff in America in 1935,
as voted by a panel of American tailors and Apparel Arts


One tends to think of Best Dressed lists as a distinctly 21st century exercise of tawdry fashion magazines which usually end up highlighting a few poor souls for whom the words "best" and "dressed" should never go together. Of course, I have heard it said more than once that most ideas associated with men's style originated in the golden age that was the 1920s and 1930s, so it probably should come as no surprise that the "best dressed" list would not be any different. 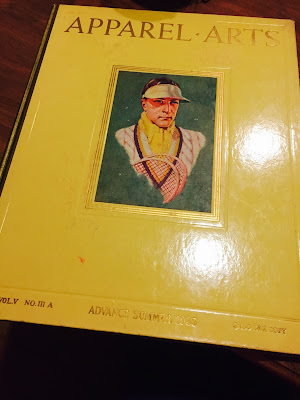 Nevertheless, I was still taken aback to come across not one but two "best dressed" lists in the Advanced Summer 1935 Issue of Apparel Arts, in an article titled "Two Galleries of Best Dressed Men." Interestingly, the first gallery was chosen by a group of 10 tailors. The caption reads:

In an informal selection by a jury of American tailors, the ten men whose pictures appear on this page were selected as America's best dressed. The sartorial pre-eminence of William Goadby Loew . . . won highest honors from the jury. The other nine men who were rated by the jury of tailors as being among the ten best dressed men in this country were selected for various distinctive details in their mode of dress. This is one of the most interesting of many similar selections.


Some of the best-dressed selections from the tailors' list:

On the next page was the gallery of Best Dressed Men as chosen by Apparel Arts. The caption on that page read:

The ten men whose pictures appear on this page were selected by Apparel Arts as America's ten best dressed men. They were chosen not only for their ability to dress fashionably and with individuality at all times but also for their consistent habit of dressing correctly for the occasion. The influence of these men and others like them on fashion is international inn scope. Their acceptance of a new fashion places upon it a stamp of approval which has an important effect on its future success with respect to its ultimate and more widespread dissemination.


Some of the selections from the Apparel Arts list: 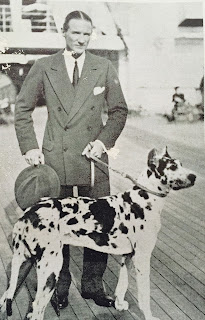 There are a few points worth mentioning here. The first is that this William Goadby Loew fellow, apparently a broker by trade, was one of only two men to appear on both lists. The fact that the other gentleman with a dual mention was one Douglas Fairbanks, Sr. certainly is a point in Mr. Goadby Loew's favor. Indeed, in 1935 he may actually have been the best dressed man in America who actually worked for a living. Fairbanks is identified on both lists as a motion picture actor, but of course his last career screen credit was 1934's The Private Life of Don Juan.

No stranger to best-dressed lists of the 1930s

Another interesting point: aside from Fairbanks, each list includes only one other Hollywood actor. Sadly, this particular copy of Apparel Arts is not in the greatest condition, so that the images in this article have marks from where the pages became stuck together over time, In the case of both actors, their names were obscured by the damage. However, the actor included on the Apparel Arts list was easily recognizable. Apparently he was a style icon in his own day, a classification which has carried on into the present:

The actor from the tailors' list was one Warner Baxter, an actor who was certainly as famous as Astaire in his own era. Sadly, his film credits as well as his sartorial exploits are not as widely remembered as those of Astaire's. 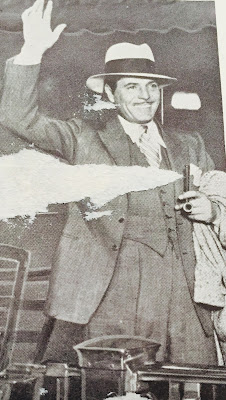 Finally, it should be pointed out that there is one other significant difference in these two lists of best dressed men: occupations. Perhaps cognizant of the difficulties associated with the procurement of payment for services rendered, 8 of the 10 men listed by the tailors hold positions in finance or industry. The Apparel Arts list, on the other hand, identified three entrants as society men, while two others are described as  sportsmen, which I have heard may be a euphemism for someone who makes a living from betting on games of chance. For someone who wrote a book about the stylish gamblers and gangsters of the 1920s and 1930s, this is further proof that the sporting set, as well as some other fellows who resided on the other side of the tracks, were very much involved (and recognized as such in their own time) in setting the sartorial trends of the day (insert link for shameless plug here). 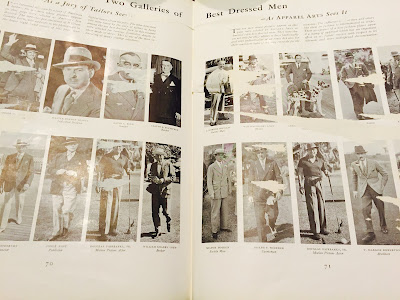 That Well-Dressed Fellow With the Silky Voice: A Few Words on Dandy Wellington 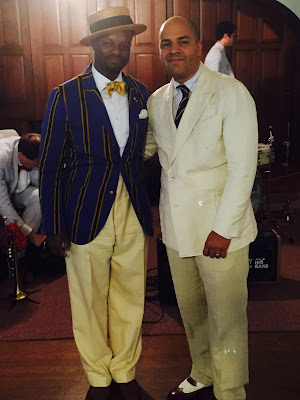 I don't recall the first time that I meet Dandy Wellington, but I like to think that it is a few minutes after he has made himself right at home on a stage somewhere, fronting for his band and flashing that cheshire cat grin from underneath his trademarked Stetson, the one he wears with the rakish tilt and the turned-down brim. Perhaps it is over at the Hudson Cafeteria, or maybe it is the Hotel Chantelle or Cafe Tallulah. Anyway, I am pretty sure that I see him on a stage somewhere downtown before that night at Bergdorf's, where he is sporting a midnight blue Brioni dinner jacket with an embroidered paisley design, the kind that your eyes kind of get lost in after the fourth or fifth Pimm's Cup. This fellow is just killin' it, I say to myself, and he hasn't even seen him do a set yet. As if on cue, he takes his place at the center of the make-shift stage area on the mezzanine and the band is off and running, and of course I am off with them - back to that era of wonderful nonsense as Westbrook Pegler once called it. 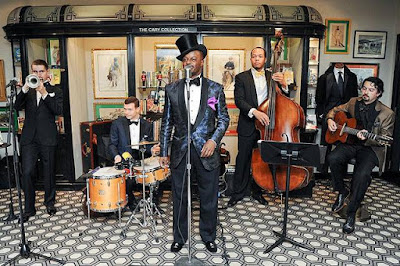 Don't hold me to it, but I am pretty sure that the band breaks into "Lulu's Back In Town" that night at Bergdorf's. I hear them play that tune a couple of times in a few different places, and every time I hear it I can't help but wonder if anybody asked the band to play that one for Bernard "Lulu" Rosenkranz when he blew back into the big city, after Dutch Schultz was acquitted on income tax evasion charges in Malone, New York, during that glorious summer of 1935 when the song was still just a few months old.

The very first time that I actually lay eyes on this fellow Wellington, he is wearing plus fours with a natty blazer, a snappy bow tie, and an eight-piece pie cap that is positively exquisite in its floppiness. The ensemble is topped off by smile that radiates sheer joy as he hops around the dance floor that has been positioned right in front of the main stage of the Jazz-Age Law Party on Governor's Island. It doesn't look like the Charleston or the Lindy Hop but then again I'm not an expert in these things. I could just as easily call it the Happy Dandy or the Lively Wellington or something to that effect. 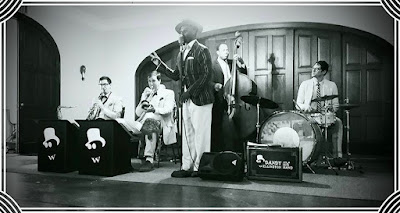 My little girl and I are off to the side of the bandstand with an unobstructed view of this guy with the happy feet and the sunny disposition, and we both can see that this fellow is surrounded by quite a few sets of eyes and even more smiles. Someone behind me tells a friend that this fellow is from Harlem and now my smile is as big as anyone's, and the little girl and I both join in the round of applause for Dandy Wellington, purveyor of well-dressed jazz and last of the great uptown dandies.

A blast from the past: Cole-Haan's Werner 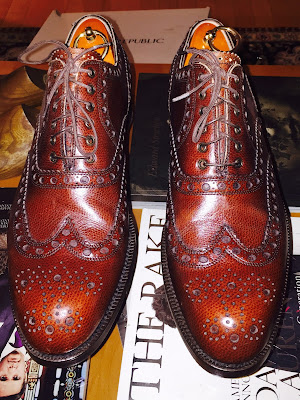 Cole-Haan has a checkered recent history when it comes to men's shoes. The venerable American company began making shoes in Chicago in the 1920s-1930s. If you can find a vintage example of their work,  the craftsmanship can be stunning. More recent examples of their work are less impressive, as the quality of the shoes tends to differ drastically from model to model.

In the last 20-30 years, the company has occasionally created footwear that harkened back to the company's salad days. One such example was the company's working relationship with some of the more prestigious English shoemakers, most notably Edward Green. I have written at some length about the Edward Green for Cole-Haan oxfords - you can read more here and here. Most of the Edward Green models that I've come across in the past were fairly standard versions of the Cadogan, which is to say that the collaboration was probably truer to Edward Green's storied history than Cole-Haan's. However, shortly after Cole-Haan was taken over by Nike, they dug deep into the archives to create a classic wingtip that was designed with a tip of the cap to the company's glory days.

Made in Italy by an unknown manufacturer, the Cole-Haan Trafton (polished calf) and Werner (scotch grain) models were eye-catching, to say the least. The shoes had a high vamp with 6 reinforced metal eyelets, larger than normal punching and pinking, and a wide welt - all characteristics that were featured on classic Cole-Haan shoes of the 1930s and 1940s. 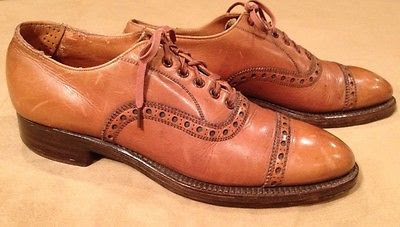 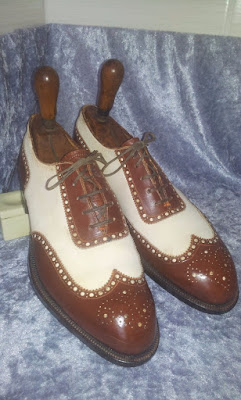 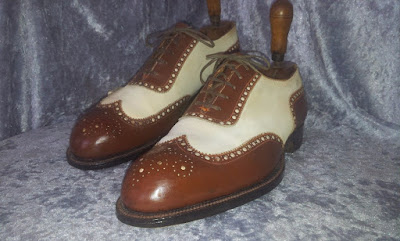 
If all of that wasn't enough, the shoes also featured a toe-cap that was almost Hungarian in its appearance. The chiseled, narrow-waisted "fiddle-back" sole, however, was the crowning accomplishment here. Like a work of art, each pair of shoes was signed by the Italian shoemaker. Finally, if all of that didn't justify the $700-800 price tag, the heel designed by Nike using their patented "Air" technology promised a very comfortable fit for the wearer. 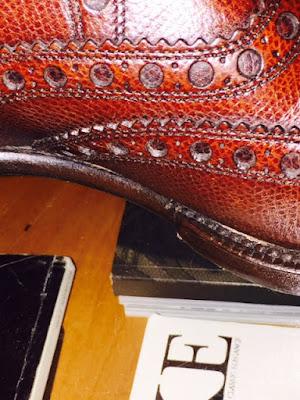 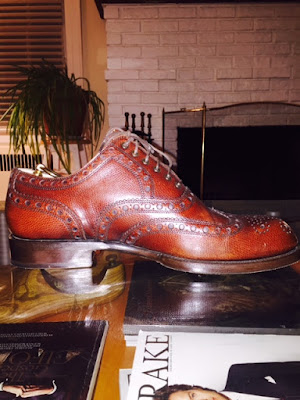 Initally, when the Trafton was first released, shoe aficionados raved about the classic design of the model. Equal time was also given to the head-shaking decision to create such a stunning design while using some kind of plastic-leather composite for the uppers that created the deepest creases imaginable after only a handful of wears.

Eventually, Cole Haan hit the ball out of the park with the Werner, which was essentially the Trafton but in a absolutely stunning scotch grain leather. The model that I happened to discover is in a beautiful chestnut color which, when paired with the dramatic lines, Stradivarius-like sole and aesthetically-pleasing broguing, makes for a model that Cole-Haan's Chicago forbears would certainly be proud of. 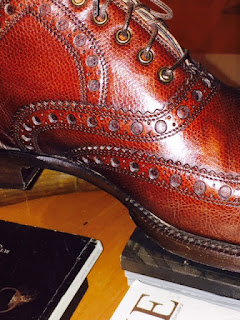 A Lovely Article in New York Magazine on Wilfred Rosario

A lovely piece on a great guy and an amazing artisan. You can read the article here.

I was shocked and saddened to hear of the passing of Wilfredo Rosario, owner of Wilfred Tailors. I was a probably a customer for over 10 years - in that entire time, Wilfred was always a true gentleman and an absolute pleasure to work with. We became friends in the last few years as I became a more frequent visitor to the shop, and I often found myself dropping by to chat even when I didn't have any items being worked on. As a friend and a true artisan, he will be missed.