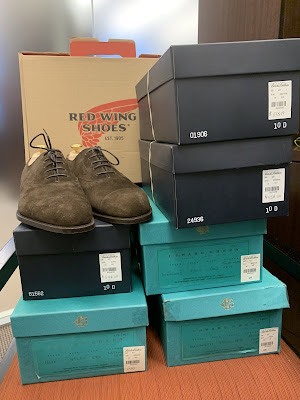 Around this time last year, I received an email about the 1st Brooks Brothers Warehouse Sale. I thought that was a great sale - with Edward Green shoes priced at 50% off, Peal & Co. at 70% off, with an assortment of Lock & Co. Trilby hats and other items at deep discount thrown in for good measure. Well, this year's iteration pretty much put last year's to shame. For whatever reason, it seems that Brooks Brothers has decided to sever their ties with Edward Green. This isn't surprising, as the two companies have had working relationships off and on since the 1970s. Perhaps the retail price on the EGs is just too steep for the typical Brooks Brothers customer, but the shoes just don't seem to sell very well at retail. So it wasn't too shocking to hear that Brooks Brothers had decided to liquidate the inventory at a severe discount. My recollection from last year's sale was that the company tried to discount them for as low as 70% off but the venerable shoemaker objected. At this year's sale, those objections must have fell on deaf ears. 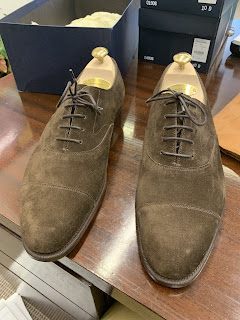 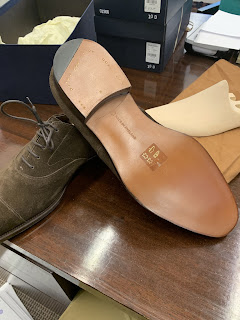 What was more surprising were the rumors that Brooks' Alden inventory was also going the way of the dodo bird. Alden shoes have been sold continuously at Brooks Brothers for as long as I can remember, and the $500-750 price tag wasn't out of line with the rest of the company's offerings. Whether the rumors are true, nevertheless Alden's were being offered at a staggering 70% off the retail price. If this sounded like some kind of sartorial heresy, imagine my surprise when I saw that the remaining Edward Green shoes were priced to move at 80% off.  I also heard that the sale was extended to a 5th day and prices were dropped to 90 percent off, but I didn't have the heart to go back for more shoes :-( 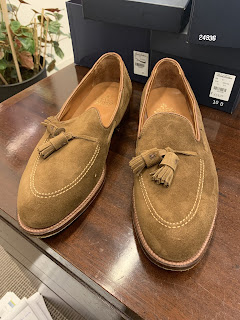 A loyal follower of An Uptown Dandy who happened to be passing by on the first evening of the sale alerted me to what was happening. I was unable to get there but decided to check it out the next morning. When I arrived, there were a few shoe aficionados roaming around in shoe shopping heaven, but the crowds were not excessive. Word clearly still had not gotten out about this sale. 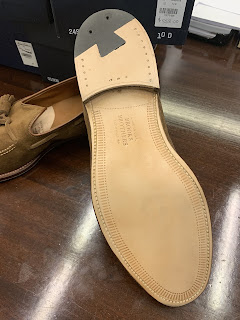 Apparently I did miss out on the Alden shell cordovan loafers that were priced to move at $140 per pair, but my friend had been kind enough to set aside a few pairs of Edward Green shoes in my size. I began trying them on to see what I should purchase but quickly decided that at those prices I would buy whatever I could find in my size and sort things out later. 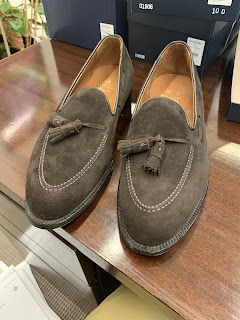 With that in mind, I ended up with 4 pairs of Edward Greens, 3 pairs of Alden tassel loafers, and a pair of Red Wing chukka boots. Ultimately, the suede EG Chelsea oxfords were a bit too snug, and I actually already had the snuff suede Alden loafers and a pair of mink suede EG loafers that were looked too much like the chocolate suede Alden shoes. So I put those up for sale at various forums and cleared them out within 48 hours. I've posted pictures for your viewing pleasure. So in the end, I came away with 3 pair of Edward Green shoes, 1 pair of Alden tassel loafers in natural Chrome Excel, and the Red Wings. After all the flipping (I also sold a pair of EG Asquith shoes that never made it into the rotation), I probably spent somewhere around $75 per pair that I kept. 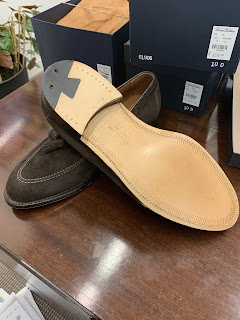 Not bad if I do say so myself! Many thanks to the folks at Brooks Brothers for hosting yet another affair to remember! 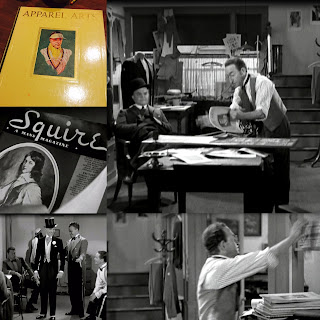 I posted about this some time ago on Instagram and at An Uptown Dandy, but I thought it was worth reposting again. If you're familiar with Fred Astaire's Swing Time, you'll recall the early scene where Astaire's pals trick him into reworking his wedding attire by convincing him that the entire ensemble is hopelessly out of fashion. With that in mind, the magazine in the scene - wherein the tailor flips through the issue for proof of what's currently in vogue - looks suspiciously like an issue of Apparel Arts! The cover of the issue in the tailor's hand is a dead ringer for the Advanced Spring 1935 issue, the cover of which I have included here. So, what do you think? Conclusive proof that Fred Astaire was enough of a fan of Apparel Arts to include it as a prop in one of his films? You decide!
Posted by Dan F. at 12:11 PM No comments: Links to this post 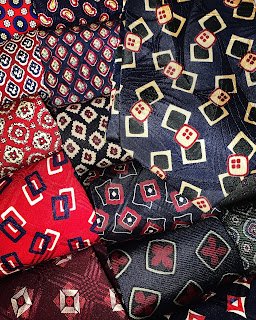 Ties started it all for Ralph and his original made in the USA offerings offer a wonderful range of 1930s-inspired designs. Actual vintage ties from that era are wonderful in their own right but I find the 30 to 40-year old RL models offer retro styling with modern tie dimensions that are more practical for present-day tailoring. Most of the vintage 1930s ties that I own make for a much shorter (and generally wider) tie, which to my eye stills works best with high waisted trousers. However, with modern day waistlines, there’s too much of a gap between the waist of the pants and the tip of a true  1930s tie. So the RLs offer a reasonable alternative if you’d like to add a little 1930s flair to your wardrobe 🤩