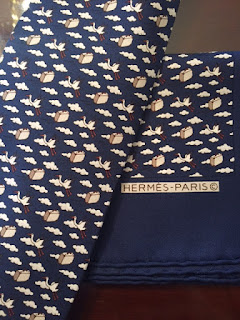 More items for sale on eBay. As always, I'm more than happy to discount any items for my loyal readers!

You can find the auctions here.
Posted by Dan F. at 1:25 PM No comments: Links to this post 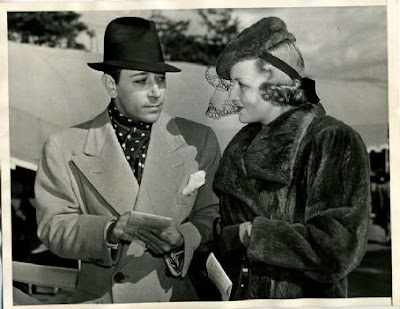 George Raft and Virginia Pine.
Posted by Dan F. at 3:36 PM No comments: Links to this post 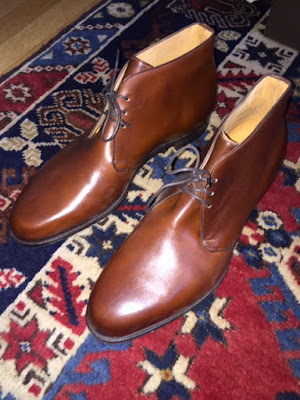 I used to be surprised when I came across decades old shoes from Edward Green that appeared to be virtually untouched and were certainly unworn. However, after seeing a few pairs of shoes in my own collection go neglected year after year, I can no longer feign complete and utter shock when a new old stock pair of shoes comes into my possession.

While 25-30 year old new old stock shoes aren't particularly hard to come by, one rarely finds shoes in this condition still in the box, with the original dust cloth and quality control card signed by one of Edward Green's staff. The total package, in this case, is what separates this vintage new old stock example from rest. 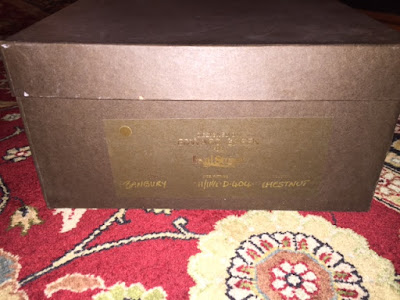 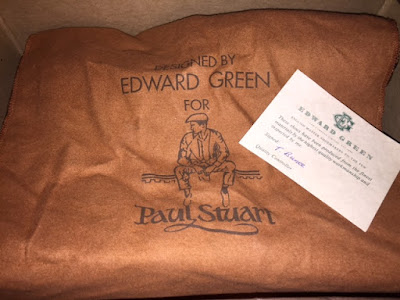 In this case, the shoes in question are a pair of 3-eyelet ankle boots made by Edward Green for Paul Stuart on the not-quite-in-circulation 404 last. The calf leather is in the chestnut color and is from an era when the patina was much more even across the length of the upper, although there is slight burnishing evident in the toe box and at the rear quarters. More recent models in the ready-to-wear line also feature more of a beveled waist along the sole than this pair of shoes - from what I understand, that's an entirely cosmetic detail. 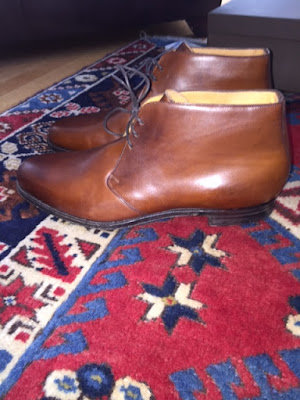 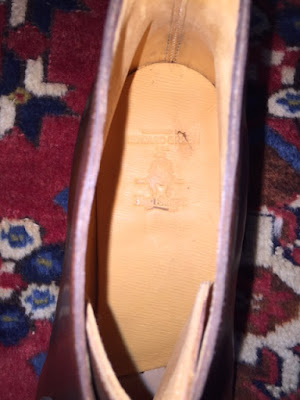 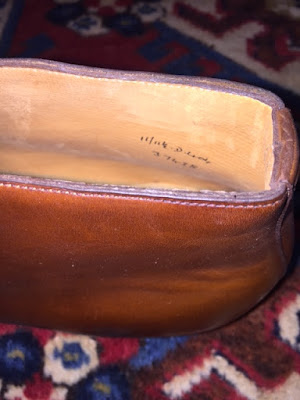 Note the D width. I've seen this before with Edward Green shoes sold at Saks and Ralph Lauren. I'm not quite sure if this was an ordering faux pas, but in my experience these are not US D or medium widths - these are actually UK D width shoes made for the US market, so it's really a US C width. I don't think Edward Green would have provided the UK and US size but then just the US width, as they've never done with any of their models as far as I know. But in the past, when I've asked the salesman what the width was, they responded that it was a D width as listed on the shoe box or inside the shoe. Of course, it was a UK D width, not a US D width - so that is actually a US C width, a fact that I had to find out a few times the hard way :-) 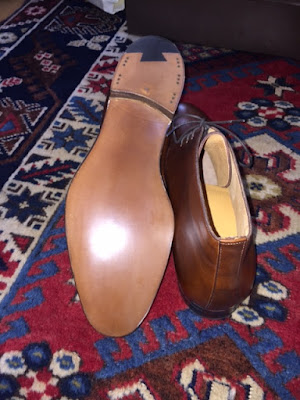 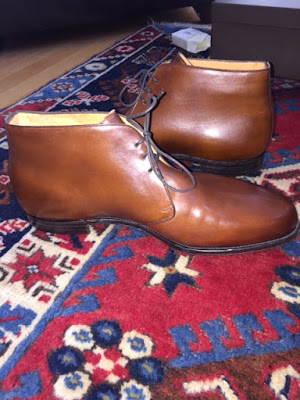 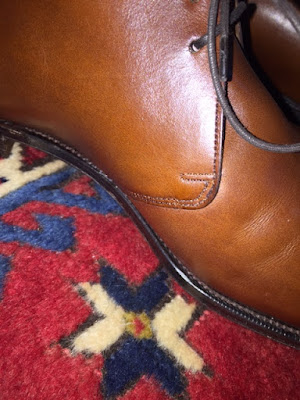 The boots really are in pristine condition. If I was forced to point out anything out of the ordinary, it would be the slight discoloration just above the welt, along the upper edge of the sole. I've certainly seen this before on some of my other pairs of first quality Edward Green shoes, so I don't believe this would even quality as an imperfection. But there it is! 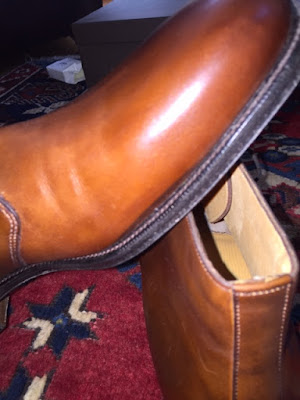 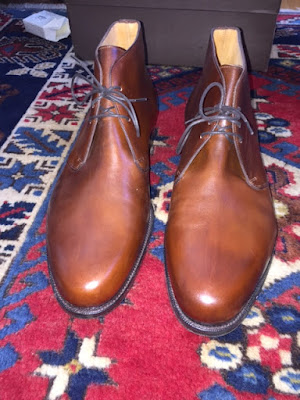 Here's a link to the auction!

In the Spring of 1934, the Crossett Shoe Company (made in Augusta, Maine!) teamed with the Palm Beach company to offer summer models "distinctively styled to blend with the summer suit." The shoes were "made of genuine Palm Beach by exclusive arrangement with the manufacturers of these famous fabrics." Proof positive that even brand collaborations are old school :-) 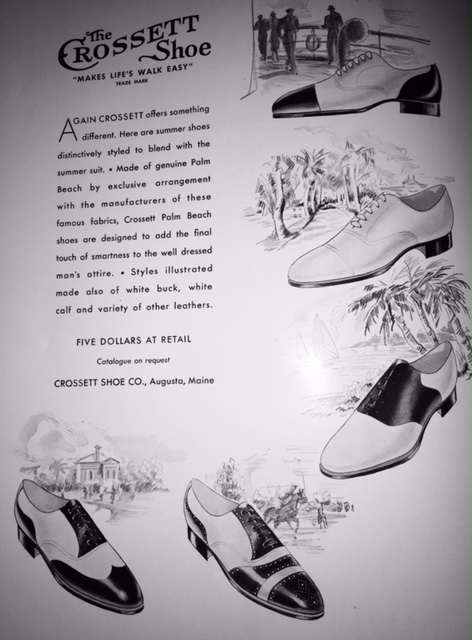 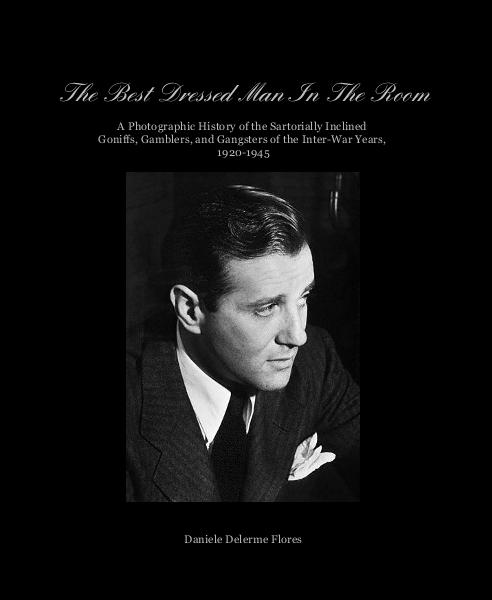 If print books aren't your thing, download a copy of The Best Dressed Man In The Room at iTunes today! You can find the link here - only $14.99!

Yes, a shameless plug but it's been a while so cut me some slack :-) 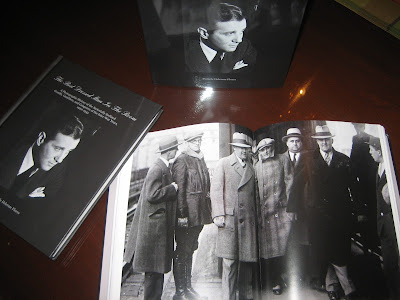 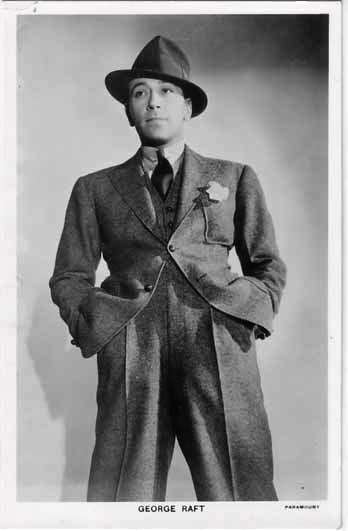 Some Sunday Sartorial Splendor from The Best Dressed Man In The Room archive.

They don't make 'em like they used to: A Vintage Royal Stetson Playboy 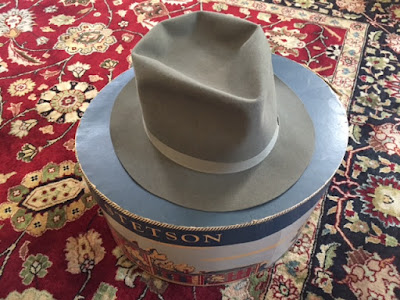 I've been having fun working on my vintage hat collection over the last few months and while it might be too early to generalize, I think I'm partial to the wider brim and higher crowns that were all the rage in the 1940s. Recently, I purchased a beautiful Royal Stetson Playboy which seemed to have all the characteristics of a 1940s hat. As I understand it, Stetson didn't begin to use the "Royal" designation until the early to mid 1940s, so the hat was at least that old. 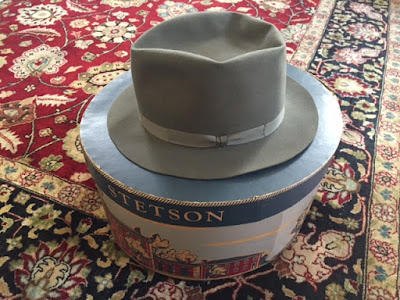 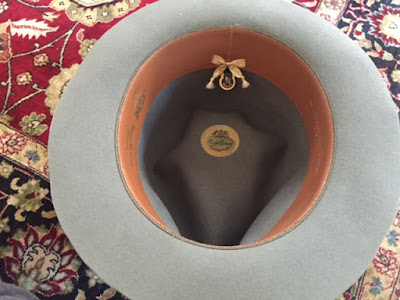 Another tip was the Stetson logo stamped onto the sweatband - the crest with the stars in the left corner of the shield was apparently discontinued around 1950 or thereabouts, so the 1940s time-frame seemed about right (real hat experts are much more adept than I at pinpointing the age based on the size and re-order tags behind the sweat band; I have no such talent although those in the know thought the 1940s sounded good). 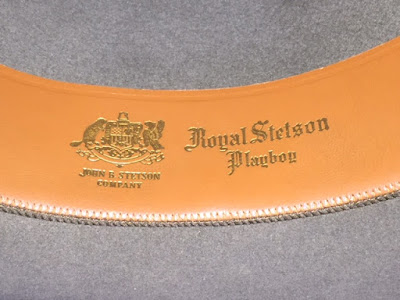 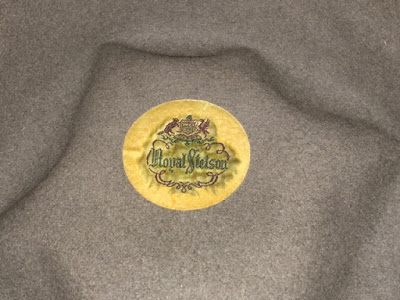 What threw me off (but didn't stop me from completing the transaction) was the short brim. Measuring in at under 2 inches, this didn't seem to confirm with what I know and have seen of 1940s era headwear. I took the Playboy into J&J so Adam Coren and the gang over there could get a good look. After looking the hat over, they were fairly confident that someone cut the brim down to size. Sacrilege, I'm sure some of you are muttering to yourselves as you read this. However, I like to think that some fellow purchased or came across this hat in the 1940s and, still enamored of the shorter brims of the 1930s, cut the Playboy down to size*. 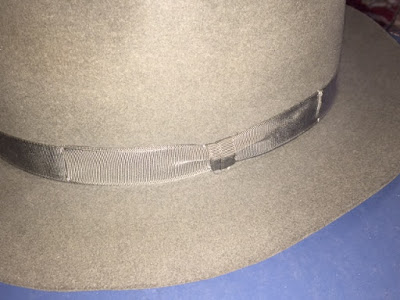 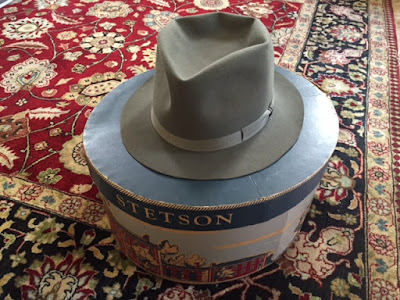 I have to say, while I prefer wider brims, there's something I like about the short brim paired the narrower ribbon and the very high crown. It looks very much like the hat pictured in this Fellows illustration from 1933 that I posted recently on the blog. Of course, the hat is about what you'd expect from a vintage Stetson - even with what was a lower-tier offering at that time from the company, the felt is really amazing. It's surprisingly soft to the touch (especially when compared to a contemporary Playboy model) and the color was just as interesting - it appears to be a mid-grey but when paired with earth tones, a hint of green comes to the fore. All in all, a great example of the type of craftsmanship that Stetson built its reputation on! 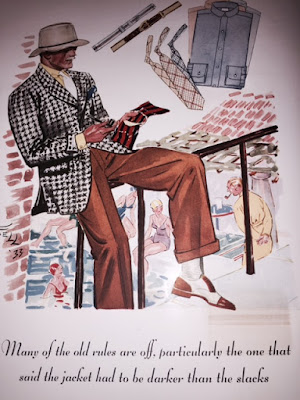 *Of course, it's just as likely that someone found the hat in the 1960s and tried to recreate a stingy brim, but allow me this touch of romanticism, if you please.
Posted by Dan F. at 2:23 PM No comments: Links to this post

An Uptown Dandy by Bill Gallo 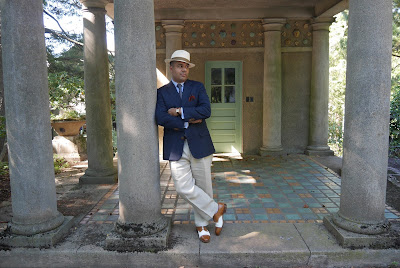