The Return of the Spearpoint Collar 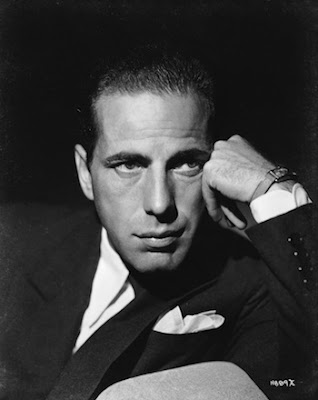 Humphrey Bogart wants you to know about the spearpoint collar,
but will you listen?


Vintage-clothing enthusiasts will no doubt be reading the title of this post and muttering softly, "I had no idea the spearpoint collar had gone anywhere." Nevertheless, it can truthfully be said that the spearpoint has never quite regained its status as the first choice of the sartorially inclined which it so deservedly enjoyed during the 1920s and 1930s (a period also known as the golden age of men's style for those of you who aren't regulars here at An Uptown Dandy). While Martin Scorcese's Goodfellas probably didn't too much for the spearpoint either, I tend to see the collar when I'm out and about in Manhattan to hear some jazz and while I wouldn't call it an affectation, it definitely requires a bit of confidence to step out on that particular limb. Of course, it helps if you're going all out for a classic 1930s look anyway. In my personal opinion, there's nothing quite like the look of a slim-fitting double-breasted suit worn with the spearpoint collar and the requisite collar bar. 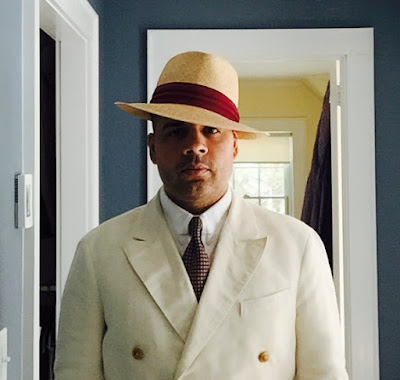 I had purchased a Polo Ralph Lauren creme double-breasted jacket on a whim some time ago. It was typical Ralph - patch pockets and half-belted with an action back. In other words, a classic jacket featuring golden-age styling. The original plastic buttons weren't much to look at so I replaced those with a set of buttons in a sort of burnished horn from Italy that I found at Tender Buttons in Manhattan. When I wore the jacket out though, it still wasn't quite right - the creme didn't quite work with any of my blue shirts, but I also didn't think the spread collars that I was wearing were working either.

With that in mind, I decided to order a spearpoint collar in some shade of white. Vintage spearpoints tended to not be in the greatest shape. For the most part, they were also generally available in some kind of stripe pattern which is probably more authentic to the period but I wanted something that wouldn't necessarily clash with the creme color of the jacket.

There were a few places that specialized in semi-custom shirts and the spearpoint collar but in the end I decided to give Luxire a try. Some of the vintage clothing guys at the Fedora Lounge spoke highly of their experiences with Luxire, and that coupled with positive feedback at Style Forum prompted me to proceed without too much trepidation. 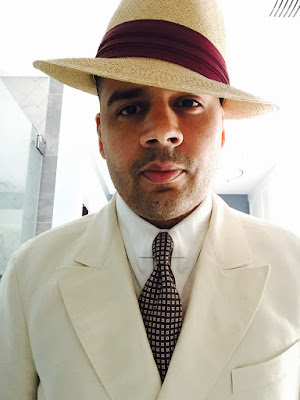 I decided on a heavy Irish linen fabric and a 4-inch collar. Luxire also allows you to choose from other options that give the shirt a more vintage look, including the half-placket and the detachable collar. The shirt basically is cut with the mandarin shirt collar with the detachable spearpoint included in the price. I thought a linen shirt with a mandarin collar might be useful for a day at the beach, so it seemed like a practical decision. For another $20, I added an extra English spread collar so that I could wear the shirt with a regular suit or odd jacket/trouser combination as well.

The shirt eventually arrived and I was very pleased. The Irish linen was definitely heavier than normal, but it looked great. The thick mother-of-pearl buttons were a nice touch, and the workmanship was about what you'd expect at the Luxire price point. The collar fit well out of the box - it will be interesting to see if there's any shrinkage in that area after a few washes. The same concern probably applies to the sleeve length but, in fairness to Luxire, they did comply with the measurements that I provided. 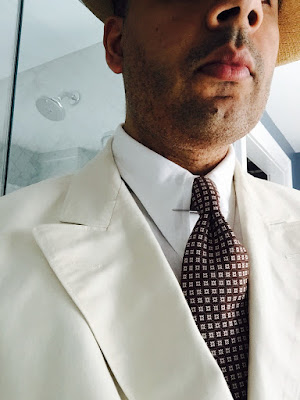 The spearpoint worked out well enough. I believe Luxire is making me enough of these to know what people are looking for. I was pleased with the curve of the lower line of the collar - some vintage aficionados pointed out that the lower line should have some curvature to it. The collar certainly has some shape to it. If I were to order another, I might provide examples of how much curvature I was looking for. There are dozens of images of varying curvature on collars worn by Bogart, Fairbanks, Raft, Cooper, etc. so I'm not sure if this is a question of period authenticity versus individual preference, but its something to keep in mind anyway. I also find that the cut of the collar is somewhat obscured by the pull  of the collar bar on each side.

All in all - I was pleased with my shirt purchase via Luxire. There are a variety of fabric offerings available to match your pricepoint, and if you're looking to experiment with the spearpoint collar it's great to have a semi-custom/custom option available out there. While I'm not sure if the spearpoint will be supplanting the spread collar anytime soon, I'm looking forward to wearing it out in the near future :-) 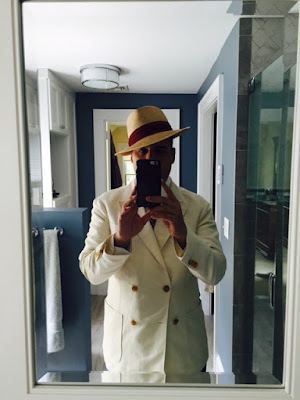 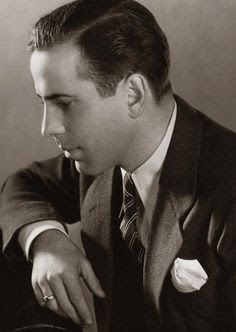